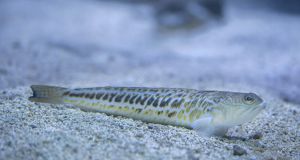 Beach-goers have been warned to be wary of the poisonous weever fish during the current spell of good weather and leading in to spring tides at the weekend.

The tiny creature is common on sandy beaches around the coast and inhabits an area known as the inter-tidal zone, which tends to be exposed during low tides.

With large numbers expected to flock to the coast to catch some of the sunshine and with spring tides approaching next weekend, which pulls the water line further out to sea at intervals, Irish Water Safety says people should be aware of the threat posed by the fish.

Although difficult to spot, it has a poisonous spine which protrudes up through the sand and can break off into a person’s foot when stepped on.

The resultant pain can be excruciating, and may even necessitate a trip to a hospital emergency department.

A sting can also cause swelling and redness, and the discomfort can last for up to two weeks.

The advice in the case of a sting is to submerge the affected area in warm water above 40 degrees Celsius which helps to break down and draw out the poison.

Weever fish poison has been known to induce allergic reaction and even anaphylactic shock, although the last known case of death in the British Isles occurred 90 years ago.

“They camouflage themselves in the sand and you literally won’t see them,” said John Leech, chief executive of Water Safety Ireland.

“You’ve got people out walking into areas they normally wouldn’t, they’re out paddling and swimming and then they stand on the little fins which can sometimes break off into people’s feet,” he added.

Mr Leech advised that “the worst thing you can do is walk gently along the beach”, and encouraged members of the public to make plenty of commotion by stomping their feet on the sand which alerts the weever to their presence and enables it to escape.

Parents are also informed to ensure children are wearing flip-flops when approaching an area of low tide.