‘Irish Water needs to get its act together’ says Drogheda mayor 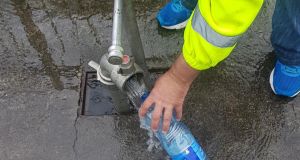 A Louth County Council worker helps fill bottles with water at one of the temporary water stations in Drogheda. Photograph: Paddy Logue

Irish Water needs to get its act together, says the mayor of Drogheda, Pio Smith, as the town enters its fourth day without water.

“They are not doing enough and they’re not doing it fast enough,” he told RTÉ’s Morning Ireland.

The town of Drogheda and parts of East Meath have been without water since last Friday because of leaks in two main pipes at the Staleen water treatment plant.

“It’s affecting people in a number of ways - young families, older people, people with serious illnesses. This is really an emergency situation.”

The lack of water is also affecting businesses, he said, especially hotels as this is the peak of the tourist season. Events such as Debs’ dances have been impacted along with businesses such as hairdressers, bakers and hotels.

“A long term solution is needed. Irish Water needs to get its act together. They are operating from one plan. They don’t have a Plan B.

“This is the second time in 12 months that there has been a significant problem at Staleen.”

Cllr Smith said that the problem was identified by Louth County Council in its annual plan in 2011.

Work has been ongoing to replace pipes around the town, he added, as there is a problem with 48 per cent leakage.

“Staleen needs to be upgraded. Significant investment is needed. They need to find a permanent solution. This is not sustainable.

“The whole town is affected since Friday night, except for Our Lady of Lourdes hospital.”

Louth TD Fergus O’Dowd has called it a crisis for residents, accusing Irish Water of failing to plan ahead and deal with the issue.

“They have failed in the delivery of water tankers to the streets and the villages of our area so that people have an adequate and proper supply,” he said.

“The proper planning has not taken place and what I am calling for is the tankers to be sent in now from all over the country to make sure that every street and every resident has an adequate supply of potable water.”