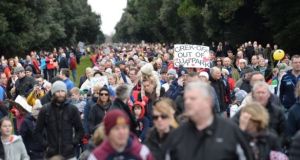 Controversial plans for more than 500 homes to be built on playing pitches beside St Anne’s Park in north Dublin have been turned down by An Bord Pleanála.

The decision, welcomed by local residents, marks the culmination of a protracted planning process that initially saw the application granted by An Bord Pleanála appealed to the High Court and finally rejected on Thursday.

The scheme was proposed under “fast-track” planning legislation, allowing applications to proceed directly to the Bord without local authority involvement. Thursday’s decision is the first time this process has been successfully challenged in the courts.

“We are absolutely ecstatic about it, all the residents. Hopefully it’s the end of it,” local Sinn Féin Cllr Ciaran Moore said of the decision.

However, despite the setback, Crekav may still resubmit its application.

Crekav may amend its application to further take those issues into account and resubmit it, particularly given the appeal of the site. The original application noted it was fully serviced and close to several transport links.

Last June, An Bord Pleanála conceded in the High Court that it had made an error when it granted permission.

The judicial review was brought by Clonres CLG, a group representing residents from the Clontarf area, and two environmentalists.

In July, the High Court said it would “remit” the application to the board, a move that would allow it to reconsider the decision and make a fresh order on the planning application.

Campaigners said they felt vindicated by the decision, which set in motion a review of the controversial plans.

The proposed development lands were formally owned by the Vincentian Fathers, the trustees of the all-boys secondary school St Paul’s College.

Crekav bought the 15 acres of land for a reported €17 million in 2015. An initial planning application for 107 houses and 274 apartments was withdrawn to make way for an alternative, larger proposal under the fast-track system.

The original decision to grant permission by An Bord Pleanala, as well as sparking local demonstrations, was criticised by Dublin City Council chief executive Owen Keegan.

A spokesman for Marlet, the parent developer, said it had just received the decision which it would analyse it before making any decisions on the site’s future.

“Marlet notes today’s announcement by the An Board Pleanala, reversing their original decision to grant planning permission for 536 homes on lands on Sybil Hill Road, Raheny,” he said.

“While understandably disappointed with the outcome, we look forward to working with the Board on future Strategic Housing Development projects with the objective of increasing the availability of sustainable and fully serviced housing in the Dublin Region.”