In a time of climate change, will the wind continue to howl? 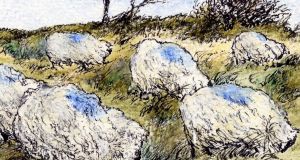 It is, after all, the wind that swings sheep the right way in fields.

With strands swept clean of footprints and ravens wheeling in an altered sky, when will the Wild Atlantic Way be restored to the one big thing that makes it wild – the wind?

A neighbour I used meet on the shore would call it “the wynd” in the Elizabethan way. As landlubber and beachcomber, braving “the wynd” was once a regular intoxication. I leaned into it along the tongues of foam, the glistening wreaths of kelp, with little flocks of sanderlings and turnstones rising before me and settling in my wake.

I miss a good gale. I could do with it swelling my aged lungs to the last pink twiglet of alveoli, bracing my stooping shoulders and rinsing my rheumy eyes with tears. Gales now find me indoors, unable to cope with their magnificent energy, brooding at my computer upon man’s subversion of the natural world. Lyricism withers in the chill of online science.

For a start, how likely is it that my polytunnel will rip into shreds this winter or be crushed by a toppling tree, the old greenhouse shiver into splinters?

The projections from America’s National Oceanic and Atmospheric Administration are fairly reassuring. Unlike 2017, the surface waters of the hurricane-generating waters of the tropical Atlantic have been “exceptionally cool” and resurgence of El Nino could put a further brake on storms. With a 70 per cent probability, there’ll be up to nine named storms, some becoming hurricanes and one or two of these, at most, turning “major”.

Last October’s Ophelia fiercely telescoped the distance from the tropics. But modelling the climate change for Ireland means bringing a closer focus to this island’s atmospheric history, the particular twists of its coastlines and mountain contours.

More than three years of running long “simulations” through the supercomputers of UCD’s School of Mathematical Sciences has enabled Dr Paul Nolan to produce an “ensemble” of regional climate models, scaled down to 4km, for the Environmental Protection Agency (EPA).

The future of the wind addresses my first concerns, on a hillside well used to shrugging off autumn and winter floods and usually shrouded from heatwaves under the ocean’s cloudy hem.

The Nolan projections are for a slight decrease – 10 per cent – in North Atlantic cyclones and a general slackening of wind energy in the spring, summer and autumn.

But “very intense” winter storms are expected to increase by mid-century and to track further south over Ireland instead of skimming Malin Head. Ophelia was one for which Mayo braced itself, but, like Storm Darwin in 2014, it chose to fell the trees in Munster.

The EPA report projects a great stretch in the growing season, especially in the “high emission” scenario that still seems likely for Ireland. But much of its wind study is geared to potentials of energy. If there’s not enough spin on the turbine blades for half the year, and too much to cope with at the peak of winter storms, the future of wind power faces new problems.

Wind and wave energy was also the priority in 2016 projections by Met Office scientists, led by Dr Sarah Gallagher. Their models for the next 30 years, however, predict weaker winds, lower swells and much calmer seas in summer, with no mention of extreme winter storms.

Wilder sea states off the west of Ireland would test the technology of wave power, but the history of Atlantic storms is daunting enough already. It was explored in a fascinating paper published earlier this year in Natural Hazards and Earth System Sciences.

The network of weather buoys deployed by the Marine Institute since 2000 have given new measures of “largest waves ever recorded”. In 2016, Storm Jake fetched winds of up to 133km/h and a 30.96m wave was recorded on a wave buoy off Belmullet.

Coastal flooding due to storm surges is now common and Dr O’Brien documents 68 examples of floods of more than half a metre. Rogue waves continue to cost lives, as people are swept off rocky promontories and ledges. Much concerned, she wants warning signs on coasts, like those for accident black-spots on the roads.