Pandemic-linked fall in emissions will have negligible impact on climate, UN report finds 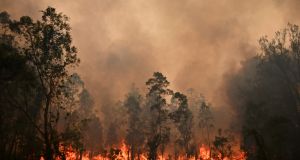 The world is still heading for a temperature rise in excess of 3 degrees this century despite a dip in carbon emissions caused by the Covid-19 pandemic, according to the UN Environment Programme. Such a rise would make much of the planet unliveable.

A “green pandemic recovery”, however, could cut up to 25 per cent off predicted 2030 greenhouse gas emissions, the annual UNEP emissions gap report finds. This would bring the world closer to meeting the 2-degree goal of the Paris climate agreement.

If governments invest in climate action as part of the recovery and solidify emerging net-zero commitments with strengthened pledges at the UN climate talks in Glasgow next November, they can bring emissions to levels “broadly consistent with the 2-degree goal”.

But a large gap between the action countries have pledged and emissions cuts needed to meet the goals remains – and major economies are not even on track to deliver on promised measures.

By combining a green recovery with swift moves to include new net-zero commitments in updated nationally determined contributions (NDCs) under the Paris Agreement, and backing this with “rapid, stronger actions, governments could still in time attain the more-ambitious 1.5-degree goal”, it concludes.

“2020 is on course to be one of the warmest on record, while wildfires, storms and droughts continue to wreak havoc,” said Inger Andersen, UNEP’s executive director. “However, UNEP’s emissions gap report shows a green pandemic recovery can take a huge slice out of greenhouse gas emissions and help slow climate change.”

She urged governments to back a green recovery in the next stage of Covid-19 fiscal interventions and raise significantly their climate ambitions in 2021. The UN is staging a global summit on Saturday to allow governments declare their scaled-up ambitions going into a critical year for the agreement.

The report assesses the gap between anticipated emissions and levels consistent with the Paris Agreement goals of limiting global warming this century to well below 2 degrees and pursuing 1.5 degrees above pre-industrial era levels.

Total emissions in 2019, including land-use change, reached a new high of 59.1 gigatonnes of CO2 equivalent. Global emissions have grown 1.4 per cent per year since 2010 on average, with a more rapid increase of 2.6 per cent in 2019 due to a large increase in forest fires.

As a result of reduced travel, lower industrial activity and lower electricity generation this year due to Covid-19, emissions are predicted to fall by up to 7 per cent. However, this dip only translates to a 0.01 degree reduction of global warming by 2050.

It would also put emissions within the range that gives a 66 per cent chance of holding temperatures to below 2 degrees, though would be insufficient to achieve the 1.5 degree goal, it finds.

It finds action on a green recovery has been limited so far. Around one-quarter of G20 members have dedicated shares of their spending, up to 3 per cent of GDP, to low-carbon measures.

The report, nonetheless, finds the growing number of countries – including Ireland – committing to net-zero emissions by mid-century is a “significant and encouraging development”.

To remain feasible and credible, however, these commitments “must be urgently translated into strong near-term policies and action and reflected in NDCs”, it adds. Levels of ambition to meet the Paris Agreement “still must be roughly tripled for the 2-degree pathway and increased at least five-fold for the 1.5-degree pathway”.

Shipping and aviation sectors, accounting for 5 per cent of global emissions, require attention, the UNEP warns. Improvements in technology and operations can increase fuel efficiency, but projected increases in demand mean this will not result in decarbonisation and absolute reductions of CO2. “Both sectors need to combine energy efficiency with a rapid transition away from fossil fuel.”

Stronger climate action must include changes in consumption behaviour by the private sector and individuals. Around two-thirds of emissions are linked to private households, when using consumption-based accounting. The mobility, residential and food sectors each contribute about 20 per cent of lifestyle emissions.

The wealthy bear greatest responsibility, it underlines; emissions of the richest 1 per cent of the global population account for more than twice the combined share of the poorest 50 per cent. “This group will need to reduce its footprint by a factor of 30 to stay in line with the Paris Agreement targets.”

To date, the opening for using recovery measures to accelerate a green transition has largely been missed, it says. Too many NDCs are “woefully inadequate”.

“Unless this is reversed, the Paris Agreement goals will slip further out of reach,” it warns.

The pandemic is “a warning from nature that we must act on climate change, nature loss and pollution”, it concludes, yet it provides opportunity for a recovery that puts the world on a 2-degree pathway.

A total of 126 countries covering 51 per cent of global emissions have adopted, announced or are considering net-zero goals. If the US adopts a net-zero target by 2050, as suggested in the Biden-Harris climate plan, the share would increase to 63 per cent, the UNEP finds.

It strikes an optimistic note on the growing number of countries committing to net-zero emissions goals by mid-century – “the most significant climate policy development of 2020” – in contrast to the wildfires, droughts, storms and glacier melt which intensified this year.