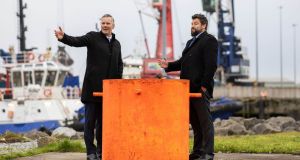 Pat Keating, chief executive of Shannon Foynes Port (left) and Paul Doherty, managing director of Gavin & Doherty Geosolutions’ at Foynes Port after publication of a report on the potential for the Shannon region in wind energy. Photograph: Sean Curtin/True Media.

The Shannon estuary and the wider west coast can provide “unprecedented renewable energy opportunity for Ireland” by becoming a strategic location for development of floating offshore wind technology, an independent study has concluded.

While the floating wind sector globally is in its infancy, Ireland is well-placed to be among first movers, the report written by Gavin & Doherty Geosolutions Ltd, says.

The opportunity arises from “the emergence of floating offshore wind technology as the biggest growth area for renewables globally; the Irish west coast having among the best wind resources in the world and the unrivalled deep waters of the Shannon Estuary”, it adds. The report was commissioned by Shannon Foynes Port.

The report estimates the available wind resource could generate up to 70 gigawatts (GW) of floating offshore wind energy in coming decades, providing an export opportunity from excess electricity generated but also for green hydrogen produced from offshore wind farm sites.

Shannon Foynes port, it concludes, is best placed to service the future offshore floating wind market due to its proximity to the resource and the market, and the availability of one of the deepest and most sheltered estuaries in the world.

Floating wind technology as opposed to fixed wind turbines have been deemed more suitable to turbulent sea conditions off the western seaboard where the Atlantic’s mean wind speeds of 14metres/second provide a distinct advantage.

The port has “extensive future landbank availability”, good proximity to transport corridors and 1.6 GW of existing connectivity to the national grid.

“Given the timelines to develop the required infrastructure, now is the time to commit the investment and ensure Ireland Inc capitalises on the global opportunity as first movers in this exciting space. Shannon Foynes Port is the vehicle to maximise the benefits from the floating wind market,” the report says.

It identifies potential to create up to 20,000 jobs in manufacturing and a further 10,000 industry jobs arising from supply chain opportunities in the region by 2050.

The report notes that the first offshore wind farm sites in Ireland are situated on the east coast, with fixed foundations. “However, as the offshore floating wind technology becomes more efficient and the associated supply chain develops, the west coast of Ireland will become much more favourable.

“The total potential capacity on the west coast dwarfs the east coast opportunity,” it predicts.

A large constraint, however, is the ability to connect this resource to the grid and export excess power to other markets, it finds.

To capitalise on the wind energy potential, “Ireland needs to apply significant investment in research and development to solve this market barrier along with looking to reduce the cost of floating wind technology”, it adds.

It cites a lack of an overarching Government policy identifying the export opportunity; weaknesses in the planning and consenting process, inadequate port infrastructure, and “lack of an integrated approach” which is allowing other competing countries get a head start, notably Scotland, Norway, Denmark, the Netherlands, Belgium, France and Portugal.

Shannon Foynes Port Ltd chief executive Pat Keating said the report quantifies for the first time the unique floating offshore wind opportunity “that exists for Ireland and not just for this region”.

Citing a Danish study indicating that every gigawatt of offshore renewable energy produced will support up to 14,600 jobs, port chairman David McGarry said: “The calculations are easy to do from there and, even if we target only half of the estimated 70GW potential off the west coast, there’s a huge economic and jobs bounce from this as well.”