Online retailers ‘not paying a cent’ for recycling in Republic 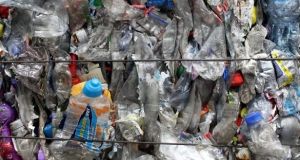 Sixteen per cent of the packaging waste produced in 2018 was plastic. Photograph: Getty Images/File photo

International online retailers have created more than 10,000 tonnes of waste within the Irish market this year but are not “paying a cent” towards the nation’s recycling bill, recycling body Repak has said.

In its latest online shopping report, Repak said the amount of packaging waste generated in the Republic of Ireland by online shopping would grow by 34 per cent this year but that the cost of recycling this waste was being paid for by domestic Irish businesses, thus creating “an unfair competitive advantage for on online retailers”.

The group accused some of the world’s largest online retailers, including Ebay, Ali express, Missguided, Boohoo and Pretty Little Thing of creating 27 tonnes of waste packaging per day in Ireland “without paying a cent towards the nation’s recycling bin”.

He said the situation would continue to get “dramatically worse” if not addressed by the Department of Communications, Climate Change and the Environment along with the Environmental Protection Agency.

Mr Clancy commended Amazon for showing “leadership with its environmental responsibilities” in financially supporting the cost of recycling its packaging on the Irish market and called on other international online to follow suit. He said any extra revenue generated through recycling payments would go back into the recycling of material and reduce the cost for Irish businesses.

If the current rate of growth continues, the volume of online packaging entering Ireland will exceed 100,000 tonnes by 2031, said Mr Clancy, who has called for an online retail forum to be established by the Department of Communications to address the matter.

“What is considered a significant problem within the recycling industry and retail industry today, will soon become overwhelming in time,” he said. “Online shopping is outpacing the growth in traditional retail by more than double. The longer we wait to enforce reasonable and sustainable recycling legislation for online retailers the more unfair it becomes for Irish businesses contributing to our recycling effort.”

Cardboard is the main packaging material used when importing online goods, accounting for three quarters of the more than 10,000 tonnes of package waste generated in 2018. Sixteen per cent of this packaging was plastic.

Irish households will spend an estimated €2 billion on online consumer goods from international retailers in 2018, equivalent to 33 million tonnes of goods. Clothing/apparel, footwear and accessories are the most popular items purchased online followed by consumer electronics, toys and hobbies, jewellery and watches.

Last week the recycling group warned that Ireland needed to increase its plastic packaging recycling by up to 80 per cent by 2030 if it is to meet strict new EU targets. The requirement will pose “a monumental challenge” to all sections of Irish society, Mr Clancy said.

Under the European Commission’s circular economy package, and a new directive requiring an end to single-use plastic, Ireland must increase its plastic packaging recycling from 98,000 tonnes today to 175,000 tonnes by 2030, when all plastic must be recyclable. The targets are legally binding; missing them will result in substantial, but not yet quantified, fines for member states.