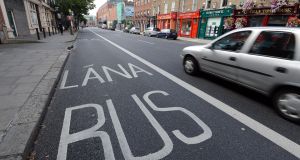 Virtually none of a multimillion euro Government fund set up last year to encourage the use of greener buses has been spent. File photograph: Eric Luke/The Irish Times

Virtually none of a multimillion euro Government fund set up last year to encourage the use of greener buses in Ireland’s cities and towns has been spent.

It was established to help buses and taxis switch away from using diesel and petrol.

However, Mr Ross has revealed that, in terms of what has been spent so far, none of the money has gone towards buses, while just €45,000 – or less than 2 per cent – has been drawn down under a grant scheme for taxis.

The National Development Plan, the Government’s blueprint for the country over the coming years, states that fossil-fuel-powered buses in cities and towns will be replaced with cleaner alternatives.

However, State-owned transport companies will continue to buy diesel buses until July next year, under the National Transport Authority’s BusConnects fleet renewal programme.

The Government has set a target for half of the national bus fleet – about 500 buses – to be low-emission vehicles by 2023, with plans for full conversion of the fleet by 2030.

One of the aims of the Green Public Transport Fund was to jump-start the use of energy-efficient and alternatively-fuelled buses among so-called public service obligation bus operators.

These are publicly-subsidised bus services – considered necessary but not financially viable – run by Dublin Bus, Bus Éireann and M&A Coaches.

“However, an up-to-date and comprehensive set of vehicle trials is being planned to commence later this year to help inform purchasing decisions for new buses over the coming years.”

Mr Ross said “it is envisaged” that the National Transport Authority will use the fund to start alternatively-fuelled urban bus trials this year.

Just seven taxi drivers took up a grant under the fund since the start of this year. There are more than 20,000 taxis in Ireland.

The Climate Action Network Europe, which is supported by the European Commission, rated the State second last in efforts to reach its targets under the Paris Agreement on climate change.

“Ireland is set to miss its 2020 climate and renewable energy targets and is also off-course for its unambitious 2030 emissions target,” it warned.

The coalition said that without new, immediate and substantive efforts to cut emissions, the Republic “faces annual non-compliance costs of around €500 million”.