Video has emerged of people who fled into the sea to escape the flames of wildfires that swept through the Greek resort of Mati last week. Video: Elia Kallia 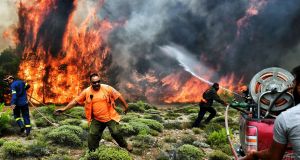 Firefighters and volunteers fighting flames at the village of Kineta near Athens, Greece. Terrified residents fled to the sea to escape the flames. Photograph: Getty Images

This week’s fires in Greece left death and devastation in their wake. Thousands of people fled their homes, and more than 80 were killed as the flames blazed through swathes of land in the picturesque resort of Mati, just 30km from Athens. As Greece deals with the rescue efforts and the clean-up of the inferno, the fires also provide a devastating glimpse of the type of extreme weather events the world is facing as temperatures rise due to climate change.

“There are no words to describe the feelings of all of us these times,” said Greek prime minister Alexis Tsipras during a televised address on Tuesday. “The country is going through a tragedy.”

Hundreds of tourists, including some Irish holidaymakers staying in popular resort areas along the coast, were caught up in the firestorm. The fire claimed the life of Irishman Brian O’Callaghan-Westropp, who had been on honeymoon with his wife Zoe Holohan. They were parted as the blaze spread quickly through the area, and Brian was later confirmed dead.

Evangelos Bournous, the mayor of the Rafina-Pikermi area, told reporters he had seen flames engulf more than 100 homes. 'It is a total catastrophe.'

The stories emerging have been harrowing. Emergency services reported finding bodies in the area, in one case a group of about 25 people, including some children, who had tried to escape the flames but were found clinging to each other. About 100 people are still reported missing, although there is no official figure. At least 187 people have been injured.

While arson is suspected as the cause, there were several longer-term contributing factors both in terms of the widespread nature of the fire and the speed at which it took hold.

This summer’s heatwave and temperature highs of 40C were a significant factor. Greece experienced an unusually dry winter, and the lack of rain left groundwater sources low. Last summer was also hot, and this lack of water meant vegetation had failed to fully recover. These were the “perfect storm” of conditions which allowed the massive fires to erupt.

The death toll, Greece’s worst since wildfires killed 60 people in the country’s Peloponnese region in 2007, seems likely to grow as the authorities begin the grim task of inspecting the burnt-out cars and wrecked homes in which some people sought escape or refuge, only to find themselves trapped.

Evangelos Bournous, the mayor of the Rafina-Pikermi area, told reporters he had seen flames engulf more than 100 homes. “It is a total catastrophe.”

Europe has faced brutal heat waves in recent summers. Last year tourists in flip-flops and bathing suits fled wildfires in France and Italy. This year damper weather prevented the usual flare-ups in Spain, Italy and Portugal, but unusually high temperatures have led to wildfires in Sweden, Finland and Norway. Heat waves in the UK and Germany have worried public health officials there.

“This summer has seen heat waves in northern Europe. Greece and southern Europe haven’t seen the same excessive heat,” says Piers Forster, professor of physical climate change and director of the Priestley International Centre for Climate at the University of Leeds.

“The fires in Greece are down to a combination of events, including very strong winds. They also had a very dry winter. This drying of the Mediterranean region is one of the biggest signals from climate change, and most certainly caused by greenhouse gas increases.”

Fanned by strong winds of up to 60mph, the Greek fires moved quickly, and stark images of the charred remains of rows of burnt-out cars and the blackened skeletons of homes painted a frightening picture of the types of event that the world could be facing more frequently due to climate change.

Across Europe countries have been sweltering in unusually dry and hot summers, with record-breaking temperatures fuelling fires in several countries.

Latvia, Finland, Norway and Sweden have all experienced wildfires. Even more noteworthy are fires in the Arctic Circle in Sweden, where temperatures reached 30C. “This is a serious situation, and the risk for forest fires is extremely high in the whole country,” Jakob Wernerman, operative head of the Swedish Civil Contingencies Agency, told reporters.

The extreme conditions are in line with patterns that scientists attribute to climate change. Heat waves can be linked to climate change in several ways: increased greenhouse gases in the atmosphere hold more of the sun’s heat, raising temperatures globally. A hotter climate in turn changes the way air and ocean currents move around the planet, which can further increase temperatures in certain places such as the Mediterranean.

“The fact that we have so many extremes has to be inextricably linked to human interference in the climate system,” says Peter Thorne, director of the Irish climate analysis and research units at Maynooth University. While it doesn’t mean that every single event can be uniquely attributed, “we have changed the probability of the type of events we are seeing”.

“Because of climate change these extreme heat events that we are seeing are more likely,” says Thorne.

However, despite the warning signals global action to reduce greenhouse gas emissions is still not enough to reduce the danger from the worst impacts. “The kind of summer we have today if we continue emitting greenhouse gases will become the norm around 2040, and by the 2080s this summer may be seen as a cool summer unless we change our ways,” said Thorne.

The Paris Agreement, a historic accord to reduce carbon emissions, committed countries to a global plan with the aim of limiting global warming to well below 2C. However, current pledges are not enough to keep within this goal. This has not been helped by the announcement last year by US president Donald Trump that the US was withdrawing from the agreement.

According to Thorne, the best estimate if all countries kept to their pledges under the agreement is that “the world would warm up somewhere between 3C and 5C”. While it is now almost impossible to avoid warming, the “more seriously we take mitigation, the more we will avoid. But what constitutes dangerous climate change is fundamentally place and context specific.”

The world will not warm at the same rate everywhere, meaning that some areas will be worst hit than others. Some areas are already warming at a higher rate, such as the Arctic. There the warming is much greater, and this could have detrimental impacts.

There are concerns that higher warming in the Arctic could create a dangerous tipping point, a point of no return. The past four winters have been unprecedented in the Arctic – while scientists aren’t quite ready to say we have passed the point of no return, there are concerns that what is happening could have a detrimental impact globally as ice melts.

Ireland’s efforts to reduce greenhouse emissions are proving inadequate, and this week the Climate Change Advisory Council said we cannot meet our targets to cut emissions by 2020. Council chairman Prof John Fitzgerald said that policies being pursued were inadequate. Scathing in his assessment, Prof Fitzgerald said: “We can’t reach 2020 [targets] even if we stand on our heads.”

While Ireland is not likely to be as badly hit as other parts of the world, we will not be immune from the impact of climate change, and it is likely that we will experience more droughts and hotter summers like the current conditions.

Globally there will be a higher chance of extreme weather events such as the recent fires in Greece, along with hurricanes. Climate scientists agree that urgent action across the world is required to prevent even greater impact, and the clock is ticking.

“Both increases in heat waves and floods are the canaries in the coal mine of climate change. Countries need to work together to reduce emissions. They have 10 years to act to prevent these heat wave deaths becoming a regular occurrence,” said Prof Forster.