No big jump in traffic as Phoenix Park reopens its carparks

Since Covid-19 restrictions, people could only drive through amenity but not park there 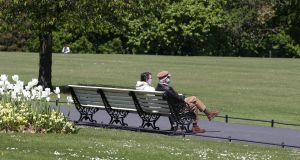 ‘The park has been beautiful in recent times without traffic and shows what it could be like.’ Photograph: Stephen Collins/Collins Photos

Car parks in Dublin’s Phoenix Park reopened on Monday morning, but drivers appeared cautious about taking advantage of the facilities.

Cars were never banned from the park – the gates at Castleknock and Parkgate Street remained open to traffic throughout the pandemic – but since the end of March drivers could only use this route as a throughway, and were prohibited from parking.

Four car parks have now been reopened: at the Papal Cross, the camogie grounds, the football club, and Upper Glen Road. The Visitor Centre car park is open to “cocooners” only, and parking is banned on Chesterfield Avenue, with the hard shoulder reserved for cyclists. All gates, except the Castleknock and Parkgate Street entrances, remain shut, and parking is only permitted in the designated car parks.

While the drizzly weather may have been a factor in dampening drivers’ enthusiasm, the relatively small numbers who did use the car parks on Monday morning were certainly not gung-ho about their return.

“I’m nervous about it,” said a Glasnevin resident who brought her three boys aged two, five and seven to the park. “There’s a lot of space here, and I want them to be able to run around without being on top of people, particularly old people, but if it gets much busier I’d be reluctant to come back.”

Another woman who had driven to the park to meet her daughter and grandson said she was glad the weather was poor. “If it was sunny there’d be 10 times as many people here. And then if someone parks beside me and we both get out of the cars at the same time, where is the distancing? Apart from today, I’m staying in.”

Obviously we need to have access for cars to places like the zoo, but maybe the side roads could be kept car-free

Elaine Walsh, who drove her son Sam (5) to the park to meet a friend, said she did think there should be some parking facilities, but would not like to see a return to widespread parking.

“I would love to see traffic restricted. The park has been beautiful in recent times without traffic and shows what it could be like. However, to be able to drive into a car park not too far from an entrance is really handy with a small child and bicycles or scooters, and elderly people like my parents would find it harder to walk in from outside.”

Sisters Gerardine Maguire and Bernie McCarthy had driven to Dublin from Wexford to take Ms Maguire’s husband for chemotherapy treatment, and were stopping off in the park for a picnic while they waited.

“It’s absolutely fabulous with the deer and the ducks,” Ms McCarthy said. “From what I’ve seen today, they should keep a small number of car parks open that you can access off the main road, but pedestrianise the rest.”

Dennis Connolly, who was cycling, said he was disappointed the cars were back on the park’s perimeter roads.

“It’s been a joy to see children out on their bikes with no dangers around them. Obviously we need to have access for cars to places like the zoo, but maybe the side roads could be kept car-free.”

Thousands of people signed an online petition, set up on Thursday night, calling for the end of the use the park as a throughway for motorists.

However, the Office of Public Works said, on the advice of gardaí, Chesterfield Avenue was being kept open for emergency services, essential workers and access for workers within the park.

Local communities have previously opposed the closure of the park to commuters, as they say it would increase traffic in residential areas.

Coronavirus: One person has died, as 21 cases diagnosed 17:59
‘Drug craze’: Use of laughing gas by under-18s should be banned – FG TD 17:37
Second ever woman elected to chair of Bar Council 17:16
Garda Commissioner disputes claim of journalistic privilege 17:02
Face masks: All you need to know about where, when and why you need one 16:29