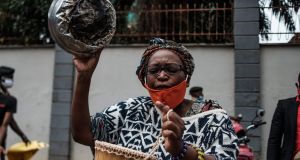 Activist and poet Stella Nyanzi was hauled away by police after leading a protest decrying Uganda’s “hunger pandemic” on Monday, as poor citizens across the country struggle to get food due to coronavirus-related restrictions.

On Monday, Nyanzi announced she would march through Kampala “with my empty saucepans and my hungry children, in protest against the hunger pandemic spreading all over Uganda during the Covid-19 lockdown”.

“Please come and march for the hungry, the starving, the dying, the locked-in vulnerable,” she appealed online.

Uganda has had one of Africa’s strictest coronavirus lockdowns, including dusk-to-dawn curfews and a ban on transport. The restrictions have caused untold hardship for many of Uganda’s citizens, who live hand-to-mouth and are unable to do their usual work.

While the government has been carrying out food distributions, these have been slow and have not stretched far outside capital city Kampala. There have also been ongoing allegations of corruption.

Two months ago, when the lockdown and nationwide travel ban began, President Yoweri Museveni warned that anyone caught distributing food without government approval would be charged with “attempted murder” for gathering crowds and spreading Covid-19.

Critics accuse him of trying to stop opposition politicians from garnering goodwill ahead of next year’s elections.

In face-to-face interviews in Gulu, northern Uganda, some locals explained they are now surviving by boiling leaves to eat once a day. The group included old women, widows, single mothers, and people with HIV.

Last month, The Irish Times interviewed Ugandan civil servant Khalid Mahmoud, who was arrested and forced to spend a night in a crowded police cell for trying to give food to his starving neighbours.

“I feel that there is this mentality that is if it’s not the [ruling] National Resistance Movement that is doing something then nobody else should do it . . . even if people are to die, let them die,” he said. “And definitely this is not correct. They are taking every donation as being political, which is not the case.”

Nyanzi, the poet, was released from prison in February, after more than one year locked up for charges of insulting Mr Museveni on Facebook. She is known for a strategy called “radical rudeness”, which was once used to rebel against colonisers.

The situation in Uganda echoes many other African countries, where lockdown measures and their enforcement – including brutality by security forces, as well as problems accessing emergency healthcare – have caused more deaths than Covid-19.

In a statement, Nyanzi and her supporters said coronavirus-related restrictions had led to an “apartheid state” that benefited the rich and increased the suffering of the poor. They called for free masks for everyone, an easing in lockdown measures, food distributions to those in need, and the release of political prisoners and people arrested for violating coronavirus-related restrictions.