Coronavirus: Outdoor gatherings of six permitted in the North 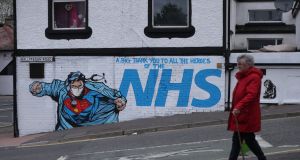 A mural supporting the NHS near the Ulster Hospital in Dundonald, Belfast. Photograph: Niall Carson/PA Wire

Outdoor gatherings of up to six people who do not share a household are to be permitted in the North after the Northern Executive approved the relaxation of some coronavirus restrictions.

Churches will be allowed to open for individual prayer, and golf courses will also reopen.

Drive-in religious services, cinemas, concerts and live theatre performances are also permitted, providing all those attending stay in their vehicles.

Making the announcement at the Executive’s daily press briefing on Monday, the first minister, Arlene Foster, said the decision to further relax restrictions had been made according to the scientific and medical advice, and was dependent on venues and individuals following guidelines on social distancing and hygiene.

The measures will come into force as soon as the regulations can be introduced by the North’s health minister, which the first minister said she hoped would be later on Monday.

Each of the moves was outlined in step one of the Executive’s five-stage plan for exiting lockdown, which was published last week.

However the Executive did not give the go-ahead for people to meet indoors with relatives who live in other households, which is also included in the first stage.

“We understand that’s going to disappoint some of you,” Ms Foster said, “but we would ask you to remain patient and trust that this Executive, informed by the most up-to-date scientific and medical advice, is in the best position to guide you when it’s safe to do so.

“It’s a matter we will constantly review, and I give you that commitment.”

Northern Ireland recorded six further coronavirus-related deaths on Monday, according to the Department of Health (DoH). It brings the total number of fatalities in the North to 482.

An additional 659 individuals were tested in the most recent 24-hour period, resulting in an additional 16 confirmed cases of coronavirus, also known as Covid-19.

A total of 4,401 positive cases have been confirmed in the North, and 39,918 people have been tested.

As of Monday there were 71 active outbreaks in care homes.

The figures released daily by the DoH cover mainly deaths in hospitals, and do not include fatalities in care homes and hospices. Statistics released on Friday by the Northern Ireland Statistics and Research Agency (NISRA), which cover deaths in all settings, showed that a total of 599 deaths involving Covid-19 occurred in Northern Ireland up to May 8th.

The Bishop of Down and Connor, Noel Treanor, “warmly welcomed” the decision to reopen places of worship for private prayer.

“I know it will bring tremendous consolation to all people of faith throughout the North of Ireland,” he said.

He said churches within the Diocese would reopen following a full risk assessment and according to the capacity of each parish to do so “safely and in a accordance with public health guidance and best practice.”

The North began its exit from lockdown on Monday. Garden centres and recycling facilities reopened, with queues at many venues, and employees returned to work on construction sites were social distancing could be facilitated.

Angling also resumed, and marriages were permitted in the case of a terminal medical diagnosis.

The relaxation of the regulations, Ms Foster said, had been made possible by the “vast majority” of people following public health advice.

“They have been hard-won freedoms,” she said, “and it is vital that when you exercise those freedoms that you do it in a way that does not put anyone else’s safety at risk.”

The deputy first minister, Michelle O’Neill, said the approach to exiting lockdown would be “measured and cautious” but they wanted to give people “some hope that there is light at the end of the tunnel.

“We will get there,” she said, “and we’ll get there quicker when we all keep doing what we’re doing and staying apart.”