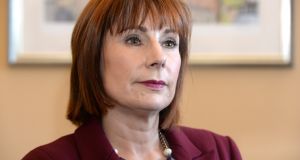 Minister for Culture and Heritage Josepha Madigan said there was “no basis” for making the site subject to legal protection under the National Monuments Acts. Photograph: Cyril Byrne

An early medieval settlement with extensive burial grounds discovered on lands formerly owned by the late taoiseach Liam Cosgrave is “quite common” Minister for Culture and Heritage Josepha Madigan has said.

Ardstone Homes wants to build more than 600 homes, mostly apartments, on the 16-acre site at Scholarstown Road in Knocklyon in south Dublin. The company bought the land last year for a sum reported to be in excess of €30 million.

Ardstone has sought permission from South Dublin County Council to demolish Mr Cosgrave’s former home before making an application to An Bord Pleanála.

An archeological assessment report commissioned by Ardstone described the site as an “early medieval enclosed settlement with human burial recorded” with a “ringfort ditch”. It was of “medium-high significance” .

In response, the Minister said although the site is of archaeological interest, “it is not a unique or unusual site but instead is quite common”.

“There is no basis for making it subject to legal protection under the National Monuments Acts,” she said.