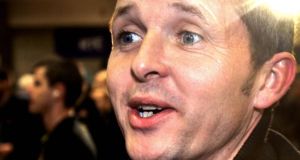 Richard Boyd Barrett: he said they had to discuss how to respond to the Government’s “baby steps” on climate change

Support for increased carbon taxes by the all-party Committee on Climate Action was “ill-judged”, People Before Profit has said.

The party is to step up actions seeking a more radical response to climate breakdown, but has yet to decide if it will stage a water charges-type campaign in Ireland against likely carbon tax increases.

At a briefing on Monday to outline its dissenting position to the all-party Committee on Climate Action report published recently, it said increased carbon taxes would be “divisive and unhelpful”, and impact unfairly on those on low incomes who were most reliant on fossil fuels.

Party TD Bríd Smith said there was every risk carbon taxes would become the only tool deployed to address carbon emissions. This had been the case in British Columbia, she said, and coincided with increased emissions there, as evidenced by a report from New York-based NGO Food & Water Watch (FWW).

On their minority report, she said: “We have outlined our vision for the way in which Ireland could play its role in tackling the climate emergency that is threatening our planet.

“We don’t believe in market mechanisms that target ordinary people, who do not have any alternative to carbon. We do believe in a carbon tax, but on the profits of big business, fossil fuel companies, big food producers, the real polluters.”

People Before Profit European election candidate Gillian Brien said she was living in a Dublin City Council apartment block and was not allowed to retrofit or insulate it to reduce emissions so she had to have heat on for most of the day.

The carbon tax would increase fuel poverty, she believed. “I will stand out and protest with my community when it has no effect on emissions.”

TD Richard Boyd Barrett said they had to discuss how to respond to the “baby steps” the Government was taking, but there would be “a very aggressive focus” on climate actions to make a difference.

Speaking on support for those affected by decarbonisation, Siptu energy sector organiser Willie Noone said: “As the first test case on how the State deals with Just Transition, the situation in Bord Na Móna appears to mean that their policy is to treat employees [in the midlands] abysmally.”

Cian Parry, a member of Student Strike 4 Climate, said he felt the committee “intends to implement a series of small actions and limited measures which will fail to tackle this crisis in any serious or meaningful way”.

Meanwhile, Minister for Climate Action and Environment Richard Bruton confirmed a carbon price trajectory would be put in place and considered for the 2020 budget.

Speaking after publication of the 2019 evaluation of Ireland’s energy policies by the International Energy Agency, he said he favoured a uniform price signal for every sector using carbon as a fuel source, but was open to considering sector-specific taxes where targets were not being met.

On criticism of Ireland’s climate ambitions up to 2030 in a Climate Action Network Europe report, Mr Bruton said the draft National Energy and Climate Plan sent to Brussels in December was always flagged as a “business as usual plan”. He had always acknowledged the need for step changes, and a “whole of Government” response, which would be published shortly.