New plaza proposed for north side of Ha'penny Bridge 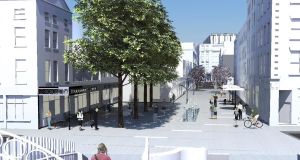 A new pedestrian plaza for Dublin is to be created on the north side of the city, beside the Ha’penny Bridge on Liffey Street, following the refusal by An Bord Pleanála of the College Green plaza.

Dublin City Council plans to pedestrianise Lower Liffey Street, which will block traffic on Abbey Street from reaching the quays at Bachelor’s Walk. An average of 1,000 motorists use the route each day.

Unlike the College Green civic plaza proposal, the council does not intend to submit plans for the Liffey Street plaza to An Bord Pleanála. The planning board last year refused permission for the College Green scheme, which would have banned all traffic, including buses and taxis, from accessing Dame Street through College Green.

The plans, commissioned by the council from dhb Architects, will be presented to councillors on Tuesday. They propose the creation of a pedestrian plaza between Strand Street and the quays, with a water feature incorporating a line of water jets or mini fountains outside the Woollen Mills cafe.

The remainder of Liffey Street Lower and all off Liffey Street Upper, which runs from Abbey Street to Henry Street, will be upgraded to create a more “pedestrian-friendly” environment, with benches, bicycle stands, trees and kerb-high planted beds.

Traffic on Abbey Street, including cars exiting the Arnotts car park, will no longer be able to access the quays through Liffey Street Lower, but will instead have to turn right into Strand Street and continue to Capel Street to reach the quayside at Grattan Bridge, resulting in a detour of more than half a kilometre to reach Bachelors Walk.

“A traffic study was conducted and showed an average of 1,000 vehicle movements a day along Liffey Street Lower and 32,000 pedestrian movements along the same axis in both directions,” the report states.

“Liffey Street has become the preferred pedestrian connection between Temple Bar and the Henry/Mary St commercial area, including the links to Parnell Street and the north inner city. Pedestrian movements heavily outweigh vehicular movements and this is not reflected in the current layout of the streets,” it said.

Green Party councillor Ciarán Cuffe said the northside plaza had become a priority for the council. “There is a huge demand for pedestrian spaces and more car-free areas in the city and I think this proposal will have a lot of support,” he said.

The plaza plans will be put on public display next month, under the council’s internal planning process. The construction of the plaza, which is expected to take six to eight months, is due to begin in the autumn for completion in spring 2020.