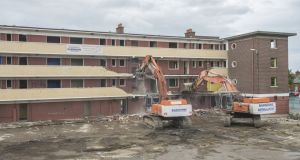 Once one of the city’s largest council flat complexes, St Teresa’s Gardens was earmarked for regeneration in 2005, but the plan was scrapped in 2009 after the collapse of the property market.

Members of Dublin City Council, many of whom have raised concerns about the LDA’s involvement, will be told that it wants to appoint a design team “immediately”.

Once built, it should have 600 social and affordable homes, alongside the 1,400 or so expected when US property group, Hines finishes redeveloping nearby land, including the former Players Wills cigarette factory.

In April 2013, the council announced plans to demolish 10 of the 12 flat blocks and refurbish two blocks to create 52 modern apartments, and to build 54 more houses and apartments.

Demolition began in February 2015. The refurbishment of the saved block was completed by the end of 2015. Construction of the new homes had been due to start in November 2015.

However, hazardous waste was found in October 2016 and everything was put on hold until the soil was decontaminated. Construction of the houses eventually began in December 2018. They are due to be finished early next year.

However, the full redevelopment of the rest of the site promising 600 homes never got off the ground. In 2017, the council produced a masterplan for St Teresa’s, along with Player Wills and the adjoining Barry Gibson site.

The latter two were then owned by Nama. However, Hines subsequently bought them. In May, it applied to build 416 apartments on the Bailey Gibson site, with 1,360 in all planned across both sites.

The LDA will tell councillors on Wednesday that it can lodge a planning application to the St Teresa’ Garden site in early 2021 and ensure “swift delivery” of social and affordable cost rental units.

Its involvement “mitigates” funding risks since it is “funded to deliver affordable cost rental product at scale”. Dublin City Council, meanwhile, would be its client, with “key roles” for councillors to have oversight.

However, local Sinn Féin councillor Críona Ní Dhalaigh said she was “hugely concerned” by the prospect of the LDA “taking over” the site: “My preferred option is for Dublin City Council to build on the land.

“The LDA hasn’t proved itself as far as I’m concerned. They say they will be quicker but I haven’t seen anything to indicate that. We don’t know if the council will own the social housing units,” she said.