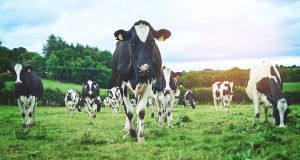 A coalition of environmental campaign groups has called on the Government to commission a new national “land use plan” aimed at reducing emissions, protecting biodiversity and helping with adaptation to climate change.

“The report is very clear in its conclusions that if we are to avert catastrophic climate change, we must transform how we produce food, and how we use and manage land. We need to produce food in a way that doesn’t harm nature. We must diversify our diets and eliminate food waste, and we must ramp up climate action across all sectors to ensure future food security,” Ms Devitt said.

There was little in the Government’s climate plan to adequately address land use as a contributor to climate change, she added.

The Green Party backed calls for a plan.Its agriculture spokeswoman Pippa Hackett said Ireland’s beef and dairy sectors must move away “from a high-cost and high-output model to a more sustainable one”.

Ireland urgently needed a land use policy and to “reduce the damage we do elsewhere. We can reduce our reliance on imports: fertilisers, grains, and palm oil. We need a self-sustainable, self-sufficient and future-proof food system for Ireland.”

He said: “The Green Party’s continuous attack on our national herd lacks climate credibility. Farmers in Ireland have a proud climate record, with the EU’s Joint Research Centre confirming our dairy farmers are number one and our beef farmers are in the top five when it comes to climate-friendly food production.

“This is important, as the UN IPCC’s report recognises there is a need to produce about 50 per cent more food by 2050 in order to feed the increasing world population.”

Although cattle numbers were increasing in recent years since the abolition of milk quotas in 2015, methane emissions were reducing as animals were becoming more efficient in terms of producing either dairy or beef, he said. In addition, animals being slaughtered younger so they were not living as long to produce methane.

Mr Kingston, who milks 120 cows on over 100 acres at Courtmacsherry in west Cork, said he had achieved reductions in his carbon footprint through a number of key changes. These include better grass management, selective breeding to increase yields and better management of water.

He cited the push by the Department of Agriculture to produce more protein crops such as spring beans to try and reduce the reliance of imports which account for over four million tonnes of the six million tonnes fed annually to Irish livestock.

According to Mr Browne, he currently spends, on average, €250 per hectare on fertiliser and crop protection but he expects this to rise by at least 10 per cent with moves towards more environmentally friendly products.

“We have to produce to higher standards the whole time but the market price has remained the same and we have to compete with imported grains that are not produced to the same high standards,” he said.