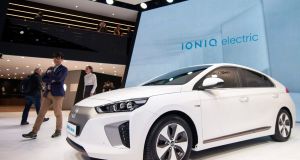 Just two of the 15 senior Ministers in Cabinet drive or are driven in environmentally-friendly vehicles.

Mr Bruton’s department said “his own mode of transport is a Hyundai Ioniq, plug-in hybrid electric vehicle . Used for his work as a Minister, is it nonetheless his own private vehicle.”

Mr Ross, who owns a Jaguar, said “I am currently using a Nissan Leaf electric vehicle 40 in the performance of my official duties. In recent weeks I have been trialling a number of different alternatively-fuelled vehicles.”

However, he and his senior officials have expressed concern about the national climate plan target for one million electric vehicles by 2030. It has been reported that Mr Ross believed a 500,000 target might be more achievable.

Since 2011 only the Taoiseach, Tánaiste and Minister for Justice have a State-supplied car and full-time Garda driver. All other Ministers have to use their own cars but their drivers are paid for by the exchequer.

The President, Chief Justice and Director of Public Prosecutions are also supplied with a State car and Garda driver.

The President’s main car, a BMW 740, is diesel-powered. His second car, a Mercedes S350, is also run on diesel. The Chief Justice’s car and that of the Director of Public Prosecutions have diesel engines.

Minister for Justice Charlie Flanagan, who has responsibility for the State ministerial fleet, said two electric cars were purchased last year “ in order to evaluate the potential for their use in Garda operational environments”.

The responses follow a series of parliamentary questions from Fianna Fáil Dublin South West TD John Lahart, who said the Government wanted people to change and yet “their own house isn’t even remotely in order”.

He noted that a lot of Ministers use their own private cars which were in the main “quite modest”, but he said the fleet supplied by the State was diesel operated and and they should move to electric cars when the fleet was being changed.

“Politicians are supposed to set an example and they need to experience the risks that are involved and the issues” such as the range of an electric car and the numbers of electric power points. “After all, they want one million of us to be driving electric cars by 2030.”

Mr Lahart acknowledged that he drives a 13-year-old diesel car. He was trialling an electric Golf for a week, but “there would need to be a scrappage scheme to afford the more than €30,000 price tag”.

Minister for Finance Paschal Donohoe’s official car is a Skoda Superb diesel, as is Minister for Agriculture Michael Creed’s, while Minister for Housing Eoghan Murphy uses a Skoda Octavia diesel.

Minister for Business Heather Humphreys merely said she used “my own private car”, as did Minister for Rural and Community Affairs Michael Ring.

A spokesman for Minister for Education Joe McHugh said he drives a Hyundai i40 2013 diesel, and the vehicle was bought long before the Minister was in a Cabinet position in education.