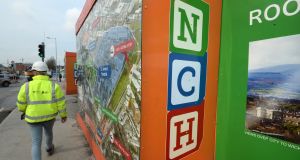 Work in progress at the national children’s hospital site at St James’s Hospital: “Patients immunocompromised or with respiratory ailments are of particular concern and a public health impact assessment may be required.” Photograph: Dara Mac Dónaill

A public health impact assessment may be required to determine the effect of the new BusConnects plan on air quality around the site of Dublin’s St James’s Hospital, a joint submission from the hospital, the National Paediatric Hospital Development Board and Children’s Health Ireland has said.

Children’s Health Ireland, the client for the new children’s hospital, would like to understand the impact on the air quality around the site “as a result of the increase in buses”, the submission to the National Transport Authority (NTA) said.

“Patients immunocompromised or with respiratory ailments are of particular concern and a public health impact assessment may be required.”

The correspondence was released to The Irish Times under the Freedom of Information (FoI) Act.

The submission, made last March, also raised concerns about the proposed bus gate on Mount Brown and said it would “negatively impact private vehicles accessing and egressing” the campus via the James’s Street entrance.

Under the NTA’s emerging preferred route for the Liffey Valley to city centre corridor, a bus gate would be provided directly east of the proposed entrance to the children’s hospital on Mount Brown.

Exiting traffic from the hospital would only be permitted to turn left towards Old Kilmainham. Local access to residences and businesses along Mount Brown and surrounding streets would be maintained through Bow Lane West and James’s Street.

The plans also propose opening the Brookfield Road to traffic from Old Kilmainham and restricting traffic at the junction with Cameron Square.

“Private vehicle users going eastbound who are not aware of the bus gate will need to undertake a U-turn if they pass the Brookfield route junction. The close proximity of the bus gate to the proposed entrance to the NCH car park/campus logistics hub may increase the congestion at this junction for such movements,” the submission says.

“There is general concern that the introduction of the bus gate on Mount Brown will have the effect of diverting traffic through the campus which is not acceptable from an operational, security or patient-welfare perspective. This would also be in conflict with the TIA [traffic impact assessment] carried out as part of the EIA [environmental impact assessment] for the new children’s hospital development.”

There will be no exit from the St James’s adult hospital via Rialto or Mount Brown. The St James’s hospital campus will be closed to through traffic.

St James’s Hospital, the National Paediatric Hospital Development Board and Children’s Health Ireland said they welcomed consultation “given the significance of the healthcare services that the St James’s Hospital campus provides”.

“It is essential that a collaborative solution is agreed before any detailed or final proposals are submitted as strategic infrastructure to An Bord Pleanala,” they added.

They also “actively support” transport measures which would further enhance public transport connectivity to the campus.

The NTA said all submissions in relation to the Liffey Valley to city centre corridor are being reviewed.

“All necessary environmental impact assessments will be carried out prior to finalising any updated proposals and are required as part of the planning application to An Bord Pleanála,” a spokeswoman said.

The NTA has published new proposals for Phibsborough, Kimmage, Inchicore, Stoneybatter and Templeogue under the core bus corridor project on its website www.busconnects.ie.