Moulting periods and the constant process of renewal

Another Life: The process of physical repair, of growing on, extends to most forms of animal life 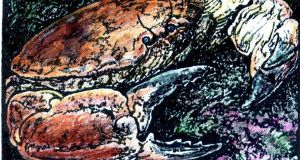 A passing wave of Atlantic drizzle and sea fog envelops the hillside for half a day, deepening the acre’s silence and muffling the drips from a billion leaves. If any birds are flying, I can’t see them.

There should at least be starlings – young ones in squadrons, skimming the hedge-tops for practice, a sudden whoosh from nowhere that has been known to put the heart across me.

In late summer, people send us pictures of young starlings, puzzled by their drab, plain brown. That they haven’t moulted is the reason, and have yet to grow the feathers with pale tips.

Young robins have yet to grow redbreast feathers. This absence of signal plumage protects them from adult birds, such is the aggressive “agonistic” (not agnostic, as once appeared here) behaviour of their kind.

Male mallard, for their part, moult their brightly coloured feathers first, going browner and drabber like females for a while. In “eclipse”, this gives them respite from the macho confrontations of the breeding season.

Robins, blackbirds, thrushes are all tucked away and silent in the bushes, lying low in the moults that follow the wear and tear of breeding and feeding. Changing feathers takes energy; gaps in the wings can spoil a flight to escape. When readers ask where all their garden birds have gone, moulting is one reason; the swelling exodus of young birds to the wider countryside is another.

Resident small birds take about five weeks to moult, migrants much less. Juvenile swallows moult their body feathers as quickly as possible after fledging in order to be fit for the long trip to Africa. The swallows’ wing moulting takes place over months of the southern winter.

Big birds, like ducks and geese, may choose to drop all their primaries (the main flight feathers) all at once, but need to find somewhere safe to do it. Ireland’s shelducks fly off to join companionable, month-long moults in shallow waters off Germany or a few, select bays in Britain.

Our barnacle geese, after breeding on Greenland cliffs, adjourn to the nearest lakeshore to drop their primary wing feathers and grow new ones. They paddle out safely out to the middle when an Arctic fox appears.

So much for the various moulting of birds. But this process of physical repair, of growing on, extends to most forms of animal life.

Regarding a small spider, dangling from a thread in the bathroom window, I was struck by its transparency – the ghost of its former self. That led me to two different kinds of moulting, both involving materials with different mechanical properties.

One is a fibrous protein called keratin, the substance of fingernails, horns, claws, feathers and human skin. The other is fibrous chitin, a derivative of glucose that forms the hard exoskeletons of insects and spiders – and, with added calcium, the even tougher shells of lobsters and crabs. One scientist computes that the world creates more chitin than even cellulose, the stuff of plant stems and leaves.

In hair, fleece and feathers, new keratinous fibre pushes up from follicles at the base. Moults are timed by hormones and seasonal change. Even human beards and tresses grow stronger in the spring, the old hair eventually jettisoned, often in autumn.

Moulting is nowhere near as easy for insects, spiders and crustaceans. Each stage of growth finds them held in an external skeleton of chitin that can’t expand like human bones and tissue. They have to form a new, more capacious, one inside, break free, swell up and move on.

Some insects, such as butterflies and dragonflies, break out of the skins of their nymphs or pupae in the one-time spectacle of metamorphosis.But many chitinous creatures have to make successive, Houdini-like escapes from their shells at several stages of growth. Both spiders and crabs moult often when young and perhaps several times more.

When a spider has formed a new, wrinkled exoskeleton and lubricated it with a moulting fluid, it boosts its heart rate, swells and flexes its muscles until the old shell cracks and shucks off.

A crab starts by reabsorbing some of the calcium from its shell to help secrete a new one, soft and paper-like, within. A day before moulting, it starts to take in seawater to help it swell. This cracks the old shell open, lifting the top like a lid, and the crab backs out gradually, taking weeks to finally withdraw all its body parts, even to eye stalks and antennae.

Discarded and washed ashore, the moulted shells of spider crabs gather dust on several of our window sills. Given what I’ve learned, they now seem emptier than ever.