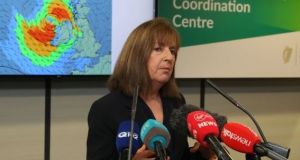 Met Éireann has accused the media of over-sensationalising the potential impact of Storm Lorenzo and contributing to the fear that some people already had in the run-up to the event.

The national weather forecasting service made the charge in responses to complaints from people who were unhappy with its warnings around the weather event at the start of last month.

“The fact that the media hyped up the low level warning, and in fact contributed to the fear some people already have, was unfortunately out of our control.

“We did contact many media outlets and ask them to remove their articles or provide accurate information, however the media over-sensationalised the event.”

In another response, Met Éireann noted: “Yellow and Orange level warnings were reached in the majority of locations, however in some areas the weather was not as severe as expected.”

In total, Met Éireann received four complaints concerning its forecasting of Storm Lorenzo to which it issued responses, correspondence released under the Freedom of Information Act shows.

One of the its replies in which it blamed the media was in response to a business person who wrote on October 7th: “You should be ashamed of Met Éireann’s performance as a credible source of weather forecasting around ‘Storm Lorenzo’ last week.

“As a business owner whose ability to trade is weather dependent I am appalled at the rapidly increasing tendency of Met Éireann to be part of the media feeding frenzy surrounding any weather event that comes Ireland’s way.

“I know and you know that ‘weather’ sells papers and radio/TV advertising space but Met Éireann shouldn’t be complicit in this commercialism.”

The business owner contended: “Your alarmist commentary stops people leaving their homes and businesses suffer. You told people to stay at home. Do we live in that much of a Nanny state?

“The elderly and children are being unnecessarily frightened all because of what we used to regard as a stiff breeze. Marry this to Met Éireann’s continuous inaccuracy and we have created a monster.”

Met Eireann also received a complaint from a counsellor who knew of a young adult with an intellectual disability who became “so terrified” by the storm warning “that they contacted the emergency services in the middle of the night, even though they were not alone, there was no crisis, and not much wind either”.

The councillor wrote: “I am aware that the impact of a storm is difficult to predict accurately. But this young person’s fear is very real and for their sake, and the sake of others in this situation, I decided to contact you.

“Could the way storms are forecast can be reviewed? Is there really a need for such a dramatic approach? A yellow wind warning is really only a windy day after all.”