Six schools planned for new Clonburris suburb where houses to cost less than €300,000 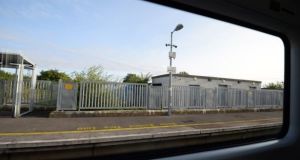 The unused Kishoge train station, near Adamstown and Clonburris. The new suburb will at its closest point come within metres of Adamstown. Photograph: Alan Betson

Plans for more than 8,400 homes and six new schools to cater for a new town of more than 21,000 people have been published by South Dublin County Council.

Approximately 280 hectares of land at Clonburris, to the east of Adamstown either side of the Dublin-Kildare railway line, is to become a strategic development zone (SDZ) to tackle the capital’s housing crisis by providing homes using “fast-track” planning.

Once the SDZ scheme, the draft of which is now available for public consultation, is in place the council will be able to grant permission for developments which cannot be appealed to An Bord Pleanála, allowing construction to start two months after an application is made.

The new suburb will at its closest point come within metres of Adamstown, the State’s first SDZ and effectively first new town of the 21st century, which is just over 15 per cent complete, but will eventually have a similar number of homes to Clonburris.

While the Clonburris lands are primarily “greenfield”, there are already two schools within its boundaries, one primary and one secondary, serving neighbouring populations. Three more primary and three secondary schools will be built on the lands in phases along with houses and apartments.

The majority of homes will be between two and four storeys high, increasing to six stories near two railway stations. Provision has been made for two “landmark” buildings, which would also be located near the stations. However, at a maximum height of 42m, these buildings would fall into the mid-rise rather than high-rise categories.

One of the stations, Clondalkin-Fonthill is already operational, the second, Kishoge was built in 2008 but never opened. As with the schools, the station will be opened when there are sufficient homes in Clonburris to make it viable. Almost all homes planned in the town will be within 800m of a station and 400m of a bus stop.

Kishoge station was originally built when a high density “eco-district” of up to 15,000 homes, mostly apartments, was planned for Clonburris. However this plan was also predicated on the development of the Metro West rail line, which was shelved in 2011.

Densities in Clonburris will be considerably lower than previously planned. The 2008 scheme, envisaged the construction of 65-110 homes per hectare, while the new plan will see 44-78 homes per hectare. The amount of retail and office space planned is also considerably lower with 21,520sq m of shops as opposed to 58,000sq m in the last plan, and 31,115sq m of commercial/employment space down from a massive 193,000sq m in the last plan. The shops and offices will be largely clustered in two areas close to the train stations.

A considerable portion of the site, 90 hectares – far larger than previously planned – has been designated for parkland and open spaces. In addition to providing an amenity for future residents, the parklands, which include a number of ponds or lakes, are needed for water drainage, following flood-risk assessments, which had not been carried out at the time of the last plan. Drainage schemes will be put in place before the construction of any housing.

The largest landowner in Clonburris, Cairn Homes, said it could provide homes costing less than €300,000, and would be in a position to start construction early next year. However, it is likely to be the end of next year before work starts on the first homes.

The draft plan is available for public consultation until November 3rd, after which a report will be prepared on the public submissions, and issued to county councillors in January. The final plan is expected to go on public display in March or April of next year.