Annual clashing of antlers begins as stags fight for their females 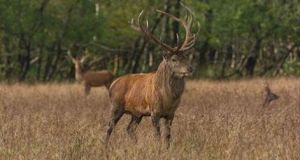 The red stag which got this year’s rut under way, pictured in Killarney National Park on September 16th. Photograph: Peter O’Toole

Fifty years ago the number of red stags in Killarney had dwindled to just 60 but today they are so visible the native deer rut has become a tourist attraction.

This year’s rut got under way on the same date as last year and involved the same red stag, according to National Parks and Wildlife Service (NPWS) ranger Peter O’Toole, who photographed the animal alongside the ranger base in Muckross.

The lusty stag gathered his hinds and started roaring on September 16th, said Mr O’Toole. At between eight and nine years old, the stag is in his prime now.

Red stags don a seasonal coat this time of year and after a summer of good fodder can weigh 190 kg and sport antlers of up to 16 points.

The clashing of antlers will begin soon as stags, friends all summer long, take to fighting – sometimes to the death – for their females.

In 2013 a mature stag was gored in the Demesne area near St Mary’s Cathedral and died from his wounds.

Stags will also turn on humans and two years ago a photographer who got too close was forced to remain up a tree for some hours.

“Last year the temperatures interrupted the rut. But this year the cold wet and damp conditions are ideal and in fact encourage the rut,” Damien Hannigan secretary of the Wild Deer Association of Ireland (WDAI).

The wild Killarney red deer, native to the area for as long as 6,000 years, are unlike the deer in parklands such as the Phoenix Park which are almost tame now, Mr Hannigan said.

He warns the public not to come between a stag and his hinds, and not to leave dogs off the leash, annoying the deer.

The WDAI are critical of recent calls by local TD Michael Healy-Rae to reduce the wild deer population by 70 per cent. Mr Healy-Rae was responding to concerns that deer were now so numerous they endangered motorists and were damaging crops.

While a deer management plan was needed, a 70 per cent cull would “decimate” the Killarney herd and would end an important tourist attraction, said Mr Hannigan.

Red deer numbers are thought to be around 700 now in Killarney, and a number of local hotels are catering for deer watchers, camera clubs and photographers.

“People love the deer. It’s a very unique event in Killarney and it is something we are very proud of,” Tom Randles, chairman of the Irish Hotel Federation in Kerry, said.

The annual NPWS and WDAI deer rut walk takes place this year on Sunday, October 15th at 9am in Killarney National Park.

The event is free of charge but places are limited and will be allocated on a first come basis by emailing wilddeerireland@gmail.com.