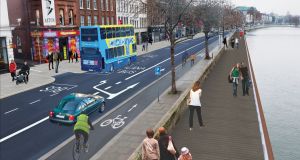 The route for a 5km cycle path along the river Liffey in Dublin has finally been selected by the National Transport Authority (NTA) seven years since planning for the project began.

The segregated cycle route from the Phoenix Park in the west to the Tom Clarke Bridge in the east is expected to cost more than €20 million and will run on both sides of the river.

More than 100 car parking spaces and 33 trees will be removed to facilitate the track, but unlike previous plans, cars or buses will not be diverted from the quays.

From the Phoenix Park to Fr Mathew Bridge next to the Four Courts, the path will run on the left hand side of the road, next to the buildings, on both sides of the river. From there to O’Connell Bridge the path will switch to the riverside to avoid interactions at the busy bus stops along Bachelors Walk and Aston Quay. The path will remain along the river side for the rest of its length.

There will be a pedestrian boardwalk for the first time on the southside, and new sections of boardwalk on the northside, particularly at Ellis Quay.

The NTA 18 months ago pulled funding for the construction of a segregated cycle path along the Liffey quays, citing the failure of Dublin City Council to select a route for the scheme over the last five years.

The council’s transportation department had presented eight different “preferred routes” for the path since 2012, but failed to secure the sanction of councillors for any of the options. More than €360,000 was spent on the project before it was shelved in late September 2017.

The council’s last option, proposed in May 2017, involved the construction of a boardwalk over the river on Ellis and Arran Quay, which would have added up to €3 million to the €20 million cost, and required the scheme to be submitted to An Bord Pleanála. Councillors had asked that the option be subject to further assessment before any decision was made.

Brendan O’Brien of the council’s traffic department told councillors in September 2017 that the NTA subsequently suspended funding for the project pending an independent evaluation of the routes.

The NTA’s new route is also expected to exceed €20 million, and under Department of Public Expenditure and Reform rules, will need to be subject to a “business case” analysis before it goes ahead.

City councillors and the Dublin Cycling Campaign welcomed the plan, which will be made available for public consultation before any formal planning application is made. The council hopes to start construction of the scheme by the end of next year.

Routes on both sides of the river had previously been proposed by the council but had proved unpopular at the public consultation phase, with respondents favouring two-way running on the northside.

To facilitate this, in October 2016 the council’s transportation department proposed facilitating the continuous cycle route by implementing a permanent ban on private cars and lorries from Ellis and Arran Quays, diverting traffic for 1.5km through the residential streets of Stoneybatter and Smithfield.

The diversion was necessary to get around a particularly narrow section of the quays between the James Joyce Bridge and the Four Courts, but was not approved by councillors.

A previous route, which had been selected in 2015, had involved diverting buses through an apartment block that was under construction in Smithfield. The apartments are now completed and occupied.

1 Europe enforces restrictions to avoid ‘millions’ of deaths
2 Cork shootings: Gardaí believe older son was shot multiple times
3 The real Contagion virus is out there and it’s causing virologists to worry
4 Aldi, Lidl bow to pressure to ban non-essential ‘middle aisle’ sales
5 Young homeless mother may have been dead in tent for a number of days
Real news has value SUBSCRIBE