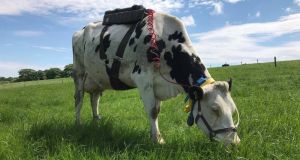 A fundamental redirection of Irish agriculture, including diversification away from heavy reliance on dairy and beef production, is among the recommendations of the all-party Committee on Climate Action report due to be published on Thursday.

A key aspect of successful efforts to reduce emissions associated with agriculture “will be land-use diversification”, it concludes. The committee accepts farmers will need support to reduce greenhouse gas (GHG) emissions, “while ensuring they can make a living for their families”.

According to the latest draft of the report, diversification of the Irish farm system will require increased horticulture production, and should follow the UK approach, where there is “a move away from an overreliance on single modes of production”.

There is a need for a more diversified, resilient, sustainable and equitable model for Irish agriculture

This, it adds, will help adaptation to the effects of climate change. “Extreme weather events of the last 12 months (storms, snow, heatwave and drought) illustrate the vulnerability of the sector to climate change and highlight the need for adaptation.”

Furthermore, it accepts “there is a growing global trend, supported by advice in recent scientific studies, towards a more plant-based diet. The trend towards more plant-based diets represents a commercial opportunity which Irish horticulture should avail of in the transition to a sustainable, low-carbon food system.”

The Government has agreed to take on board the committee’s recommendations in its own plan to be published next month, and it will feed into the National Energy and Climate Plan to be submitted to Brussels by the of 2019.

The committee, chaired by Fine Gael TD Hildegarde Naughton, endorses all 28 measures contained in “a mitigation pathway” produced by Teagasc, which it says should be adopted by the Government in an implementation plan with the Department of the Taoiseach playing a lead role.

It notes that while carbon efficiency has improved based on per head of cattle, milk production, due to expansion in the dairy sector, had led to an 8 per cent increase in emissions between 2012 and 2016.

It also highlights risks associated with increased specialisation in beef and dairy farming “which has the highest climate impact via methane emissions”.

“There are currently ambitious targets aimed at adding value in the sector under FoodWise 2025. Exports are expected to reach €19 billion, which without diversification of the sector will inevitably drive higher levels of ruminant-based production and place GHG emissions on a continued upward trajectory, even with improved efficiency gains,” it adds.

The committee agrees a national review of land use “would be extremely useful in understanding of how to optimise planning”.

It does not agree, however, to proceeding with a carbon tax on farmers, as had been recommended by the Citizens’ Assembly, with revenues reinvested to ensure adoption of climate-friendly farming – though it recommends evaluation of how it might apply in the future.

Fianna Fáil spokesman on climate action Timmy Dooley confirmed the significance of what is set to be achieved on agriculture on an all-party basis. He said the sector recognised the need for significant change “and they are up for it”. While Teagasc had done good work on how to respond to the emissions issue, the transition for the sector would be challenging.

There was no point in applying a carbon tax specifically on farming activity unless alternatives were in place, he added.

What had been agreed was a comprehensive agreement on better land use; expansion of renewable energy in farming including deployment of anaerobic digesters, improved use of afforestation and a rewetting of bogs to capture carbon. These, in his view, amounted to “big actions” underpinned by an immediate implementation timeframe.