Cloud appreciation: The pleasure of watching the sky go by 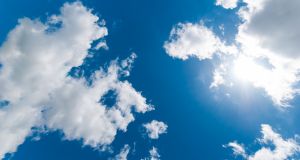 The Irish Cloud Appreciation Society has noticed a substantial increase in pageviews on its website since the Covid-19 outbreak in Ireland. Photograph: iStock

One of the striking side-effects of people’s confinement to their local areas during the Covid-19 pandemic has been a growing appreciation of the natural world around us. Nature organisations across the world have responded by helping people to identify birds, flowers, trees and insects in their gardens, back yards or nearby green spaces.

People have also shared on social media beautiful images of the sky at different times of the day – often marvelling at the absence of aircraft streaks of smoke across blue skies or cutting through various cloud formations.

Historically, farmers and other outdoor workers could predict the weather based on their understandings of different clouds. Often, this was an untaught skill that outdoor workers learned through experience. Sailors, mountaineers and other outdoor sports enthusiasts are also often good at predicting storms or changes in the weather even if most people are now guided by weather alerts on their phones or from meteorological reports.

The Irish Cloud Appreciation Society has noticed a substantial increase in pageviews on its website since the Covid-19 outbreak in Ireland. The society, founded by food writer Sally McKenna and life skills teacher Hans Wieland in 2010, encourages people to look to the clouds as a means of de-stressing.

Wieland says that watching the clouds is like “reading a poem”. Initially, he watched clouds to understand the weather patterns, but over time he watched them for pure enjoyment.

“Collecting clouds is a great de-stressing activity in these wretched times. I and others use the small booklet from the Cloud Appreciation Society called The Cloud Collector’s Handbook. It’s like collecting stamps, and there is also a CloudSpotter app, where you can collect clouds and get points for each one,” explains Wieland.

English author Gavin Pretor-Pinney founded the Cloud Appreciation Society in 2005. This membership-based online club (cloudappreciationsociety.org) now has more than 50,000 members from 120 countries around the world.

“We’ve always argued that a moment each day with your head in the clouds helps you keep your feet on the ground. Members are united in the belief that clouds are the most dynamic, evocative and poetic aspects of nature,” says Pretor-Pinney, who, as well as writing The Cloud Collector’s Handbook, is the author of The Cloudspotter’s Guide (2006) and the Wave Watcher’s Companion (2010).

Members of the Cloud Appreciation Society (who pay about €30 a year to be a member) are sent daily emails that share photos of striking cloud formations, quotations from literature or poetry about clouds, clouds in art or a scientific fact about clouds.

Pretor-Pinney also does a free live “cloud a day” broadcast at 6pm on the society’s Facebook page.

He says that during the Covid-19 pandemic, members of the society have been writing notes of their appreciation for the daily cloud email he sends out. “One member said that one bright spot in their day is that their family is symptom-free and another is the daily cloud-a-day email which is a beautiful respite in the world today.

“Another said that the email brings warmth, comfort and beauty into their day while another thanked me for making them look up in a time of looking down.”

Pretor-Pinney says he founded the organisation because clouds got such bad press and are often only noticed when they block the sun. “People talk about being under a cloud when they are depressed or how dark clouds on the horizon signify bad news, but most people also have a strange fondness for clouds,” he says.

In an upbeat Ted talk about the Cloud Appreciation Society, Pretor-Pinney points out that clouds are the most “egalitarian of nature’s displays because we all have a fantastic view of the sky”.

He argues that we don’t have to rush away from the familiar to exotic places to be surprised.

If you consider the shapes you see in clouds, it will save you money on psychoanalysis bills

“There is nothing more stimulating or more nourishing to an active, enquiring mind than to be surprised or amazed by stepping outside and paying attention to what is so commonplace that most people miss it,” he says.

“It’s a part of nature that comes to us. Even from a window, the sky gives you the opportunity to shift your perspective and connect with nature without going anywhere.”

Pretor-Pinney describes clouds as “the elemental forces that drive our atmosphere” or “expressions of the atmosphere’s moods”. And in his uplifting and amusing talks (easily accessed on YouTube), he playfully identifies all kinds of human and non-human characters in different cloud formations sent in by members across the world.

“Clouds are for dreams, and contemplation of them benefits the soul. If you consider the shapes you see in clouds, it will save you money on psychoanalysis bills,” he jokes.

Pretor-Pinney readily acknowledges that you’re not going to change the world by lying on your back and gazing up at the sky. However, he believes that the very pointlessness of cloud watching is precisely why it is so important.

“The digital world conspires to make us feel perpetually busy, and sometimes we need an excuse for doing nothing. Cloud-spotting legitimises doing nothing,” says Pretor-Pinney, who was also the co-founder of the British magazine The Idler in 1993.

Ultimately, no one is asking you to change the world while you’re watching the clouds. It is simply an opportunity to take time out where you can let your imagination fly away. Who knows, the experience might even be spark off a radical idea or a creative impulse.

There are four main types of clouds, sometimes sub-classified into 10 different types of cloud. There are also other rarer, more unusual cloud formations that don’t fit into this classification. However, it’s probably best to start by identifying the four main types which are distinguishable by their altitude and shape, whether they consist of clumps, continuous layers or wispy streaks.

Cumulus: Light, fluffy clouds which look like clumps of cotton wool. These clouds are usually a sign of fair weather and are the best ones for finding shapes in.

Stratus: Large, low-lying clouds with zigzag lines and horizontal layers, which are sometimes a sign of fog.

Cirrus: Thin, wispy strands of clouds usually seen at higher altitudes. These clouds are a sign of fair weather.

Our children have sacrificed so much – educationally, socially and mentally
3

What sold for about €385,000 in Kilmainham, Glenageary, Howth and Beaumont?
8