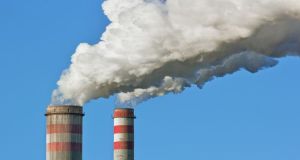 The figures show how challenging it will be for Ireland to cut its emissions by 50% over the next decade as planned by the Government. File photograph: Getty

Ireland’s carbon emissions declined by less than 6 per cent last year, despite large sections of the economy being shut down for extended periods due to Covid-19, according to official estimates.

Analysis released by the Environmental Protection Agency and the Sustainable Energy Authority of Ireland indicates emissions from transport fell by 17 per cent but residential sector emissions – mainly arising from heating – rose by 9 per cent due to so many people working from home.

The figures show how challenging it will be for Ireland to cut its emissions by 50 per cent over the next decade as planned by the Government, the analysis concludes – especially as a predicted post-pandemic economic upturn indicates a return to rising emissions.

EPA director general Laura Burke noted that while much of the drop in greenhouse gases last year was pandemic-related, energy sector emissions fell by 14 per cent compared to 2019 due to greater substitution of coal and peat by renewable energy. But she warned, the 5.9 per cent overall level of emission reductions, “at a minimum, will be required annually” over the next decade to reach Government targets.

Minister for the Environment and Climate Eamon Ryan admitted the findings “demonstrate the scale of the challenge in meeting our programme for government commitments of an average 7 per cent per annum reduction in overall emissions from 2021 to 2030 (a 51 per cent reduction over the decade) and to achieving net-zero emissions by 2050”.

Emissions from agriculture did not repeat the decrease of 2019, he noted, “and it’s clear this sector will have to do more to meet our revised national ambition”.

He added: “Our ambitious targets make more and more sense when we see what is happening in the rest of the world. The new direction from the Biden administration provides welcome impetus and will shape investment decisions at a global level. Just doing less than business-as-usual will not be enough; we must make fundamental changes to how we live our lives.”

The Minister said he is to revise the Climate Bill with amendments that will set the framework for how these changes are made.