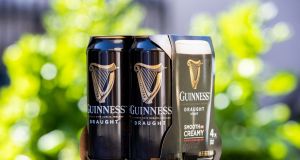 Multi-can packs will be replaced with cardboard packs, which are sustainably sourced, recyclable and fully biodegradable. Photograph: Naoise Culhane/PA Wire

Guinness is to introduce 100 per cent recyclable and biodegradable cardboard to replace plastic from its beer packaging, including the plastic ring carriers that have been known to wildlife.

The company is investing €18.5 million to reduce the amount of plastics used in its beer packaging by removing plastic ring carriers and shrink wrap from its multipacks of Guinness, Harp, Rockshore and Smithwick’s.

In particular the move is to counter problems that the packaging causes when plastic rings end up in the ocean, potentially choking wildlife or breaking down into microplastics that can enter the food chain.

Diageo’s bottling and packaging plant in Northern Ireland will be the first site up and running with the new packs, with the business investing €9.25 million in its facility in east Belfast.

The new packs will be on shelf on all beer brands in the island of Ireland from August 2019 and from summer 2020 in the UK and other export markets. Diageo exports beer to more than 100 countries. The new packaging will also be used with beers it distributes in the Republic under franchise.

At the moment less than 5 per cent of Diageo’s total packaging is plastic, and this change would be the equivalent of removing 40 million 50cl plastic bottles from the world, the company said.

Multi-can packs will be replaced with cardboard packs, which are sustainably sourced, recyclable and fully biodegradable. Individual cans are fully recyclable, including the widget in cans of draught Guinness.

Country director of Diageo Ireland Oliver Loomes said managing the company’s environmental impact was important for the planet and the financial sustainability of its business. “We already have one of the most sustainable breweries in the world at St James’s Gate, and we are now leading the way in sustainable packaging. This is good news for the environment and for our brand.”

Diageo’s chief sustainability officer, David Cutter, said consumers expected their packs to look beautiful and to be functional and sustainable. “I am proud to announce this investment, through which we have been able to combine all three. We have been working tirelessly to make our packaging more environmentally friendly and I’m thrilled with this outcome.”

Diageo’s facility in east Belfast plays a major role in the bottling and packaging of the company’s beer products, which are exported around the world.

The company has set global plastic targets to be achieved by 2025, including a commitment to ensure 100 per cent of its plastic use is designed to be widely recyclable, reusable or compostable using plastics that allow for increased consumer recycling rates. It is due to achieve 40 per cent average recycled content in its plastic bottles – and 100 per cent by 2030.