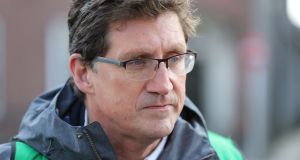 Minister for Climate and Transport Eamon Ryan: ‘This is not an academic or long-term problem. This is something we’re already facing.’ Photograph: Nick Bradshaw

The east and southeast coast from Dún Laoghaire down to beyond Bray and Greystones are at most immediate risk from rising sea levels, Minister for Climate and Transport Eamon Ryan has warned.

He said significant intervention will be required to protect the railway line from Dublin to Rosslare.

Mr Ryan also said “we’re going to see much wetter winters in the north and west of the country, and drier summers in the south and east”.

This will have a major impact on agriculture and make the growing of potatoes much more difficult, he said.

“This is not an academic or long-term problem. This is something we’re already facing here now,” Mr Ryan said, adding that rising sea levels and changing rainfall patterns are “going to require us to change”.

In a Christmas interview, the Green Party leader told reporters the southeast coast is at highest risk.

“It’s a combination of both rising sea levels and land level naturally, the movement in the tectonic plate sees a lowering in the southeast coast.”

Stressing that they were immediate, significant issues, he said: “If you look at the rail line from Dublin to Rosslare, the section to the south of Greystones – from Bray Head effectively further south and indeed even in Dublin Bay – we’ve seen in recent years the likes of Dún Laoghaire Harbour and Dart stations in Salthill and other places getting a battering.

“And it’s that part of the coast that’s most at risk and actually will require significant intervention. The protection of that rail line is not a small engineering issue and not an easy one to resolve.”

Analysis by climate and meteorology expert Prof John Sweeney showed much wetter winters in the north and west, and drier summers in the south and east, Mr Ryan said.

“The climate itself is going to change Irish farming,” he said. Pointing to the very severe drought in the southeast in 2018, he said the grass-based system there was under severe stress.

“It would force us to change. For example, the growing of potatoes will become increasingly difficult in the south and east unless there is irrigated land.”

And the north and west is already a “harsh or difficult environment” because of rain but will face continuing “intense rainfall events”.

Mr Ryan also warned that rising sea levels could threaten all major Irish cities once an irreversible “tipping point” is reached in the melting of the Arctic tundra.

“All our cities were developed around ports in low-lying areas: Cork, Galway, Waterford, Limerick; all have that same risk.”

“This is outside my lifetime,” he said, but warned that “if we collectively globally don’t address that, most major cities will be facing huge difficulties and challenges.

“Huge engineering solutions will be required.”