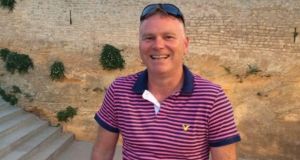 Cyclist Des Butler was fatally injured in a collision with a camper van in Co Clare on March 26th. File photograph: Facebook

The number of cyclists killed this year has already reached half of last year’s total of 10 deaths, just three months into 2017.

Garda figures show 10 cyclists died in road incidents in 2016. Five cyclists have died so far this year, up from a total of one death by the same time last year.

The most recent death happened on Monday. A cyclist in her 30s was struck by a lorry at the junction of Templeville Road and Whitehall Road in Terenure, south Dublin.

The cyclist, believed to be from Dublin, suffered serious injuries and was brought to Tallaght Hospital, but later pronounced dead.

The day beforehand, March 26th, cyclist Des Butler (50), a father of two, was killed in a collision with a camper van in Co Clare.

Mr Butler, from Caherdavin in Co Limerick, was on a training spin near Bunratty on the N18 for next Saturday’s 80km Stephen Roche Atlantic Cycle Challenge.

He had been cycling past junction 7 on the N18 when he was involved in a crash with a camper van that was travelling towards Ennis.

In a tragic twist, it is understood the driver of the camper van is a member of the search-and-rescue community based in the UK who, at the time, had been on his way to Blacksod in Co Mayo, from where the ongoing Rescue 116 operation is being co-ordinated.

Despite the best efforts of paramedics and a Shannon-based garda who spent 30 minutes performing CPR on Mr Butler, he died at the scene, having suffered extensive head injuries.

Last week, a male cyclist in his 40s also died after being involved in a collision with a car on Patrick Street, Dublin 8.

He was taken to St James’s Hospital, where he was later pronounced dead.

Earlier this month, a cyclist in his 30s was killed after being hit by a car on Conyngham Road near the perimeter of the Phoenix Park in Dublin 8.

The incident happened at about 2.15pm on a Sunday and the man was taken to St James’s Hospital, where he later died.

The first cyclist to die in a road traffic incident this year was Tonya McEvoy. She died following a collision with a car in Co Kildare on February 12th.

Ms McEvoy, who was in her 30s, was on a training ride with Orwell Wheelers Cycling Club at the time of the collision with a car at Rathcoffey.

In January this year, Minister for Communications Denis Naughten was hospitalised after he was clipped by a passing car while out cycling on a narrow stretch of road near Roscommon town.

He was wearing a helmet, which saved him from more serious injury after he toppled over the handlebars of his bike and landed on his back on the road.

Green Party Cllr Ciarán Cuffe said on Tuesday his party was calling for a commitment from the Government to improve safety for cyclists in Ireland.

“Tackling cycling deaths must be placed higher in the Government’s transport priorities,” he said.

Cllr Cuffe said 20 per cent of the transport budget should be allocated to cycling and walking measures.

“Too many cycling projects that would save lives have been stalled due to lack of funding.”

“That means enforcing the law and building new, safe, segregated cycle lanes on major roads without delay,” he said.

Fine Gael said last month that new laws making it an offence for drivers to pass cyclists too closely will be introduced this year.

Under the proposed new legislation, motorists would be obliged to pass no closer than 1.5 metres by cyclists on roads with a speed limit of 50km/h or higher.

Drivers found to have breached the rule would face an €80 fine and have three penalty points added to their licence.