‘They had two marquee tents and that was it, It was a damp squib in my opinion’ 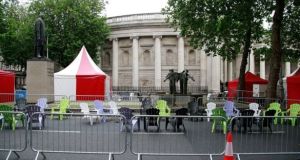 City centre businesses around College Green were left bemused by Dublin City Council’s “strange” pedestrianisation of the district last Sunday, though they are hopeful that the council will make a better fist of it this Sunday.

“I was here last Sunday and on reflection, there wasn’t much of a buzz at all,” said Jim Curran of Paddy’s Tourist Office on Dame Street. “The middle section of the street was corralled off by crush barriers which seemed very strange.”

“They had two marquee tents and that was it. There was no music. It was a damp squib in my opinion,” says Mr Curran, who remains curious, but doubtful that Dublin City Council’s plan to pedestrianise College Green permanently can work

“What would it be like during the week when you have people working? I don’t know, I think it’s a crazy idea,” he told The Irish Times.

“It was a little bit of a slow afternoon for us,” she said. Due to the barriers, “people couldn’t even cross the road, so if someone was coming from Temple Bar to come to us, they couldn’t cross.”

Future trials could be more successful, though, she said: “If the barriers that were directly outside our front door were down, which they were towards the end of the evening, I think that could be much better.”

Toni Gallagher, manager of BóBós restaurant, had looked forward to the trial but was left disappointed. “Usually a Sunday morning is our busiest time,” she said.

“It may have just been a freak Sunday... but I expected a lot of customers and I put on a lot of staff and we didn’t have barely any customers for hours.” She said staff lost out on wages and the restaurant lost out on profits.

Catherine Keogh, owner of Keogh’s cafe on Trinity Street, captured the confusion of many regarding this coming Sunday. “Have you any idea what they’re going to do?” she asked. “We’re in limbo and we haven’t a clue.”