Parnell Square deal should be investigated by PAC, says councillor 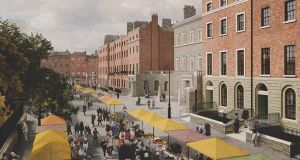 An impression of the Parnell Square Cultural Quarter

The collapse of plans for a €130 million cultural quarter on Parnell Square, Dublin, should be investigated by the Public Accounts Committee, Independent city councillor Mannix Flynn has said.

An Bord Pleanála last May granted permission for the project, which would have comprised a new city library, 200-seat conference centre, a music centre, education facilities and exhibition space, along with the a new public plaza and the restoration or a terrace of Georgian Houses.

However, Dublin City Council chief executive Owen Keegan has told councillors that following an escalation in costs from €60 million to €131 million, philanthropic funding cannot be guaranteed.

The council has decided to use its own funds to build a library only, at an estimated cost of €80 million, Mr Keegan said.

The project had become an “absolute scandal and an absolute shambles”, Mr Flynn said.

“This has been going on for seven years, and the Georgian buildings have been lying idle for the best part of 15 years because of these grandiose plans.”

The council should not go ahead with the €80 million library, Mr Flynn said.

“The whole project should be abandoned. There isn’t a library crisis, there’s a housing crisis – that €80 million could be put to better use in providing homes. I would ask the Public Accounts Committee to investigate what’s gone on here.”

In 2013 the Parnell Square Foundation, a partnership between the council and US real estate investment company Kennedy Wilson was set up to develop the project. Kennedy Wilson agreed to lead the effort to raise private donations that would “fully fund the project”, Mr Keegan said. The cultural quarter was at the time expected to cost €60 million and be completed by 2017.

However, in 2016 it emerged that the expected costs had risen to €100 million. The council subsequently agreed to contribute 45 per cent of the cost, using a loan from the European Investment Bank, with the remainder to be funded through donations. The target opening date was pushed out to 2020.

When permission was granted for the project by An Bord Pleanála in May, the cost had risen to €110 million, with a new completion date of 2023.

However, in a letter to city councillors Mr Keegan said the cost had now risen to “circa €131 million”, largely due to construction inflation.

“I have now been advised, following work undertaken by a consultant engaged by Kennedy Wilson on behalf of the foundation, that the required private fundraising could take over three years and that there is no guarantee it will be successful,” Mr Keegan said.

The consultant highlighted scale of funding required for the project relative to the sums raised previously for cultural projects in Ireland, from national and international donors, and the “fact that libraries have a lower affinity score with private donors than the arts generally”, Mr Keegan said.

The council “did not accept that the obstacles were necessarily insurmountable”, he said.

“I believe the Parnell Square Cultural Quarter development is vital to the cultural life of the city and to the regeneration of the north inner city. Every effort should be made to ensure it proceeds.”

However, he had determined the best course of action was for the council to go ahead with building the new library within its own funds, at a cost of about €80 million, with the work to the Georgian houses, the plaza and the other cultural elements to be deferred to a later date.

A spokesman for Kennedy Wilson said it had already invested almost €5 million of its own funds in the project and remained committed to supporting it.

It welcomed the council’s decision to press ahead with the library element, and said the remaining projects should go ahead in “multiple smaller phases”, he said. “Kennedy Wilson remains committed to ensuring the whole cultural quarter becomes a reality.”