The beautiful early bloom has taken on a troubling edge

There was an innocent time when one could just have thanked the sun, but that’s gone 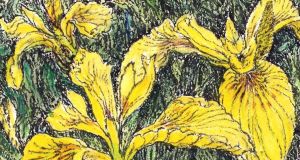 The hawthorn may have faded, weighed down now by great trusses of berries, but this year’s exuberance of wildflowers sees no end. The hillside shines with great swathes of yellow flags, which cheer my way down the boreen. This offers, as so often, a favourite stretch of bloom.

The speed limit sign at the corner warns, absurdly, of 50km per hour – this on a road scarcely more than a tractor wide, with a Mohican ridge of grass. It ushers drivers down to the car park behind the strand, a halting place now for the Wild Atlantic Way.

Out alone, too early for tourists, I can arrive on the high bank after the hazel thicket, at a private gallery of wildflowers, blooming not only a week or two early but in unanticipated propinquity (now there’s a word).

After the honeysuckle comes cross-leaved heath and above dog violets a long, superb pelmet of burnet roses, as generously floral as anything in the Burren. I stand for a while, mindfully, and behold.

The rise in man-made CO2, the chief greenhouse gas, is actually boosting the world’s biomass of vegetation

There was an innocent time when one could just have thanked the sun, but that was before the Anthropocene, the new era of the planet’s human governance. It signified, in Bill McKibben’s chilling coinage of some 30 years ago, “the end of nature”.

It has also transpired, however, that the rise in man-made CO2, the chief greenhouse gas, is actually boosting the world’s biomass of vegetation. Greening of the Earth and its Drivers was a definitive study last year in the journal Nature Climate Change – by “32 scientists from 24 institutions in eight countries”, as it now seems essential to stress.

Using Nasa’s satellite data, they judged that CO2 has been adding leaves to plants and trees to between one quarter and a half of Earth’s vegetated lands, mostly in the planet’s temperate zones. The gas boosts the photosynthesis of leaves, and adds energy to flowering.

Experiments with the blossoming have been going on for decades. Waterlilies, nasturtiums, chrysanthemums, clover and bell peppers are some of the plants given more CO2 to breathe in. The results have averaged out at one-fifth more flowers and almost as many more seeds.

How much this should taint one’s pleasure depends on one’s cast of thought. Climate contrarians have hailed the greening and blooming as excellent news, of Earth well able to mop up more CO2 in its leaves, flowers, fruits and seeds - more food, indeed, to feed any extra human billions.

This may seem to ignore melting glaciers, rising sea level, an acidifying ocean, extreme droughts, storms, wildfires and the threat of impossibly sweltering cities. And the Nature study also warned “that plants acclimatise, or adjust, to rising carbon-dioxide concentration and the fertilisation effect diminishes over time”.

Back on our acre, the snowy cascades of hawthorn blossom are matched in the shining spire of a rowan and by the record shimmer of whitebeam. But our real wonder this summer has been at the swelling green volume of the garden’s single beech tree.

Adding at least a metre to every twig, it has become a broad and billowing terraced dome of foliage. Even the slight weight of a shower can shape it to a great, green crinoline, almost sweeping the ground with its leaves, so that I have to duck my way through, dodging drips, to measure the morning’s rain in the gauge.

Even if growth in biomass subsides, there are ways of helping to balance the rise of CO2 through the workings of the natural world.

Big areas of bog could disappear with climate change

Mining our peatlands has already released huge volumes of CO2, locked up over past centuries as soil organic carbon. But millions of tons still remain and need to be kept intact. A team study for the Environment Protection Agency, the Bogland Report, said stopping turf-cutting for domestic use alone might save some 500,000 tons of carbon a year.

Rewetting cutaway peatland to renew its growth and carbon storage has since been on trial, blocking drains and planting mosses and bog cotton, on Bord na Móna bog at Bellacorick in north Mayo. Sucking up CO2 like this does work, at least on the moist and cool west coast. Elsewhere, alas, big areas of bog could disappear with climate change.

Another store of carbon is in the top 15cm of roots, humus and microbes in the soil under grassland. But how much it can hold before losing carbon to the air again varies from place to place and one farming regime to another.

Irish grassland soils could promise huge potential. But how much room is actually left for extra carbon – the degree of the soil’s “saturation” – is still unmeasured. So, unlike the carbon uptake of forests, it can’t yet be counted into Ireland’s greenhouse gas budget.

Royal Irish Academy experts have urged “a national effort of soil carbon monitoring”. This now leads the intense research by Teagasc into carbon-friendly ways of farming.