The Sioux woman of Standing Rock 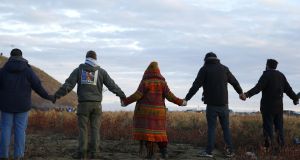 Protestors join hands in prayer as police line the hill at Standing Rock in North Dakota during a protest over the building of an oil pipeline. Photograph: Jessica Rinaldi/Boston Globe/Getty Images

Chas Jewett, a native American Lakota woman, recently completed a week-long tour of Ireland, where she spoke of her people’s spiritual relationship with the universe, their destitution at the hands of the US federal government, and her optimism following the North Dakota campaign against a crude oil pipeline crossing the Standing Rock tribe’s ancestral lands.

Jewett has been community organising for social, environmental and reproductive justice for 20 years.

Officially she is from the Cheyenne River Sioux tribe – sioux meaning snake or enemy in the Ojibway language. “Even though we call ourselves Lakota, which translates to friend, the federal government calls us enemies,” she says with a smile. “It’s kind of the way it always was.”

The suicide rate on our reservation is seven times the national average. We die at early ages – the average life expectancy of our men is 48

Her story of personal trauma – she was gang-raped at the age of nine – and of her people’s history and how they now live, makes for harrowing listening.

“The biggest lie about America is that they have stopped killing us. The genocide has never stopped,” she says. “The suicide rate on our reservation is seven times the national average. We die at early ages – the average life expectancy of our men is 48.”

Seven of the poorest counties in the United States are in South Dakota and all of them are on reservations, she says. “There’s 90 per cent unemployment, a lot of addiction. People are living in crisis.”

Jewett traces her people’s trauma back over the generations to the treaty of 1868 in which the Black Hills, where Jewett now lives, in Rapid City, were given exclusively to the Sioux, until gold was found, and the army and miners moved in, illegally.

“Those are our sacred lands. The treaty they signed gave us all the land and then they didn’t keep their word.”

She points out that indigenous Americans became US citizens only in 1924 – her grandfather fought in France in the first World War as a non-citizen – and that the Indian Reorganisation Act of 1934 still rules their lives through the system of governance it established.

“I own a bunch of land but I can’t sell it or build on it without permission from the Bureau of Indian Affairs.”

She talks of the trauma inflicted by a policy of enforced boarding schools.

We suffer from depression, anxiety and all those things that come from PTSD

“For three generations our children were taken from us at five and six years old. They had to do it or they suffered losing their land or their rations were cut,” she says. “A lot of those children were raped and tortured for speaking their language.”

The result is a people tormented by post-traumatic stress disorder. “We suffer from depression, anxiety and all those things that come from PTSD and genetic traumas. The psychologists say that the trauma is not released until your body releases it yet we were denied our ceremonies, our sweat lodges, all those things that can heal us.”

Native American religious practices were forbidden until 1978. “I was six years old before our religion was legalised in a country founded on religious liberty.”

“A lot of my people are eaten up by rage. In my 20s I was too. I was suicidal and in and out of institutions,” says Jewett. “Yet my little heart, my little soul never stayed angry. The creator brought all of these amazing people into my life.”

Some call it Racist City

The most important thing in her culture is to be a good relative. “That’s a big charge, because we are related to everything in the universe – the four-leggeds and the winged ones and the trees and the grass – not just the humans.”

Currently she is working with Rapid City Community Conversations, a Lakota led effort to improve relations following police brutality. “Some call it Racist City,” she says with a wry smile.

She set up and manages the Facebook page No KXL Through Treaty Lands, which now has more than 60,000 followers, against the construction of the oil pipeline that would carry tar sand oil from Alberta, Canada, to the US Gulf Coast.

In a nutshell, she says her work is about changing culture from one of rape to one of consent.

“We should be able to say ‘no’ but the history of our people is that every time we say ‘no’ the federal government shows up with tanks or weapons.”

Most recently she and tens of thousands of others – from hundreds of tribes to US veterans and climate campaigners such as Naomi Klein – said ‘no’ to a crude shale oil pipeline crossing the Missouri river on the ancestral lands of the Standing Rock Sioux tribe, in North Dakota.

For months the tribe and its supporters resisted the pipeline both on the ground – resulting in bloody encounters with law enforcement and their dogs – in peaceful protests from Los Angeles to New York and in the courts, leading to a historic victory last December when the Obama administration called a halt to the pipeline.

That Trump overturned this in his first week of office and that the oil now flows has not diminished Jewett’s sense of Standing Rock as a beacon of hope.

“The poorest people in the world were stepping up against these fossil fuel industries. It’s pretty powerful. Legally we are still correct.”

The fight through the courts to protect the tribe’s drinking water continues. On June 14th a federal judge ruled that the Trump administration’s hastily-issued permits violated the law in certain critical aspects.

“I’m still riding high with the world’s noticing of what we were doing at Standing Rock,” says Jewett, after speaking in Galway, one of four public events organised by peace and justice organisation Afri.

Ultimately Standing Rock is a “stepping stone to us becoming an independent nation, to us being able to govern ourselves, to regain our humanity, to say no to stuff”.

“If we are given our humanity then the whole of this fossil fuel addiction is called into question. Our humanity gives humanity to the trees, so if we are somehow able to get justice then we get Earth justice as well.”

Academics Mark Garavan, Patrick Bresnihan and Órla O’Donovan – from GMIT, TCD and UCC respectively – who all have an interest in the concept of the commons and how it applies to water, invited Chas Jewett to UCC to speak at a so-called “thinkery” on water, anti-privatisation struggles and the commons on June 24th.

The western way is to see everything as other than us

“We wanted to stimulate the debate away from polarised positions by bringing people together with very different perspectives,” says Garavan.

“The concept of water and how we relate to it was very deeply probed,” says Garavan. “There was a strong sense that water is not to be ‘managed’ but related to.”

The indigenous perspective, as outlined by Jewett, of connection to everything and of water as a connector between generations and life-forms was “really inspiring”.

“The western way is to see everything as other than us,” says Garavan. “The indigenous way offers us a new lens through which to ask ‘What does the water want to do?’ and ‘Where to rivers want to run?’”