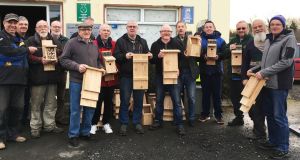 Making rooms for nature: members of Portlaoise Men’s Shed with nest boxes for birds and mammals outside their workshops. Photograph: Johanna McDonald Steenkist

“We would have been better off in our nude. We were drenched to the skin the whole time,” Dominic Kessie recalls wryly.

He and his colleagues from Portlaoise Men’s Shed had recently spent a day helping put up homes for bats and pine martens on Abbeyleix bog, site of one of Ireland’s most successful community-based landscape restoration projects.

Working in a wet woodland is hardly the kind of activity you might associate with an urban men’s shed. This remarkable movement is better known for what it does indoors than outdoors. Sheds are often focused around some form of woodwork, though many also grow fruit and vegetables.

And indeed, the Portlaoise shed excels in both these areas. Like all such sheds, too, its core purpose goes beyond any particular activity for its own sake. The aim, says Portlaoise shed founder Ray Harte, is to break down the social isolation that is increasingly evident among Irish men.

This isolation can come about through sudden shocks in life, such as retirement, separation, bereavement or unemployment, or through mental health issues and disability. Harte’s son, in his 20s, has Down Syndrome, and finds great solace in the accepting atmosphere of the shed.

But the ethos appeals to many men who fit none of these categories. They simply want to spend time relaxing in the company of others, without the pressures linked with work, and with the pub.

As a leading Australian figure in the movement put it: “Men don’t talk face to face; they talk shoulder to shoulder.”

“Any community-based work is great craic,” says Kessie, “it doesn’t really matter what type of work it is.”

Nevertheless, this shed has undoubtedly developed an exceptional enthusiasm for – and expertise in – what Ray Harte calls “building for biodiversity”.

Conservation groups and academic specialists in the region line up to praise the quality of their craftsmanship. Ricky Whelan, of the Laois-Offaly Irish Wildlife Trust, sums up the common view well: “At first they would call constantly, checking with me about ideas, measurements and tweaks. But now they are the experts, having made hundreds of bird and mammal boxes for local sites and projects.

“Over the years they have evolved a lot and made quite an industry of their wildlife boxes locally. They went from building bog-standard (no pun intended) blue tit boxes to making bespoke barn owl, kestrel, bat and now pine marten boxes.

“They have altered designs to suit local circumstances on many occasions and love the challenge of working on a prototype. Every time I call in now they are showing me some new design or feature they have added to their suite of designs.”

Still, you might not immediately pick up this aspect of the shed’s identity on a casual visit on a damp midweek morning. A dozen men, ranging in age from their 20s to their 80s, are scattered around a large upstairs space in the Portlaoise Equestrian Centre, overlooking a riding arena. The owners, the Sheehan family, offered the use of half a dozen rooms in exchange for occasional odd jobs. The shed pays for any overheads incurred.

Tea and biscuits are the common factor in an unforced conviviality. Some play pool, some darts, some chat, some just sit. I’m introduced to pyrography – drawing on wood with a heated “pen” – which is a popular hobby. Vivid images range from Jimi Hendrix to a stag.

Andy McDonald, a retired teacher of technical drawing, shows me how he has applied his skills to increasingly sophisticated computerised design for nest boxes. Whelan’s point that the group never rests on its laurels is borne out in an evolving series of 3D plans.

Harte talks about why he thinks so much of their activities now involves conservation projects. “Concern about biodiversity started globally, then it got a national profile, and now it’s trickled down to groups like the Men’s Sheds and Tidy Towns.”

His own interest, he says, has grown from simply “being happiest when out in the fields, and walking through woods”. He is not your classic birder or botanist, but he has become passionately interested in what nest box designs work best for each species, and why. “You could say we’ve been dragged into the scientific side of it,” he says happily, because as woodworkers they want to get things right.

He is aware that some box-building may be misdirected, and that conserving and expanding natural habitats will always be more conducive to flourishing wildlife than artificial constructions. But he points out that even a poorly designed bug hotel in a creche may trigger a child’s interest in insects.

He recalls working with a youth club where the kids’ motivation had more to do with getting their hands on a power drill than on saving bats or beetles, “but it gave us an opportunity to explain to them how we are losing our nature.”

Joe Grant takes me on a tour of the premises, and the modest enthusiasm of members to demonstrate their wide range of activities is infectious. An entire small workshop is dedicated to the manufacture of elaborate walking sticks, constructed from beech and hazel and incorporating decorative layers of antelope and water buffalo horn.

But the piles of varied nest boxes waiting for delivery speaks volumes about how important this kind of work has become to the shed.

Denise O’Meara of Waterford Institute of Technology, who co-organised the “Boxing Clever for Pine Marten Conservation” project on Abbeyleix Bog, sees their type of contribution, outside the conventional environmental mainstream, as vital.

“By the involvement of local groups like the Men’s Sheds in conservation projects, we increase awareness of the importance of biodiversity. We help remove the fears of the unknown by making species like the pine marten the topic of everyday conversations in the workshop, the pub or the local shop. I think that’s where the real work happens.”

Bulgarian Organ Hambar is a skilled wood carver who designed the shed’s logo. His work and company are much missed since he returned home, according to comments on the group’s Facebook page.

Mohammad Kaduor, from Syria, brings his knowledge of bee-keeping to help out in the construction of hives for a local association.

Jacek Jasiecki came here from Poland during the building boom, and was a specialist in bridge construction. But now he seems much more interested in developing the shed’s impressive complex of polytunnels, raised beds and trellises.

While we were having tea in the shed, he brought up plates of succulent melon slices, straight from the vine. He has persuaded many of his colleagues that cold beetroot soup is not only edible, which they doubted at first, but delicious.

At the allotments, he proudly shows off his bins of organic fertiliser (based on nettles), and insecticide (based on garlic). They are both, to put it delicately, less than fragrant, but they work.

He generously insists on filling a bag with a cornucopia of aubergines, courgettes, celery, potatoes and beets, all fresh out of the ground, for this reporter.

He says he now spends every day he can in the allotments. “It’s good for me here,” he says, touching his heart. And this most sociable of men then adds: “I prefer the voices of birds and bees to the voices of people.”