The large, flashy, tropical species can blind us to Ireland’s exquisite, but less conspicuous, members of this enchanting family with their impolite bed habits 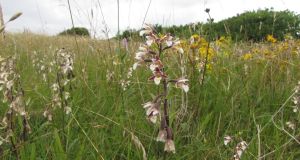 The word “orchid” carries a potent exotic charge, boosted by the large, flashy, tropical species sold in supermarkets. This can create expectations that may make many of us miss Ireland’s exquisite, but less conspicuous, members of this enchanting family.

Even when a dozen blooms are at your feet, and a thousand are spread across the grassland before your eyes, it’s remarkably easy not to see them – until you do. Then you begin to find them, if not quite everywhere, much more often than you might expect.

I have to confess that, when I first became really interested in wildflowers, more than half a century into my life, I had never recognised an Irish orchid. Then somebody gave me Brendan Sayers’ excellent field guide, Ireland’s Wild Orchids, superbly illustrated by Susan Sex.

I learned in the very first sentence that one of my favourite places since childhood, Dublin’s North Bull Island, where I had previously only noticed the abundant birdlife, is “home to eight orchid species and their hybrids”.

So one June day I drove right across the causeway to the island, where I would normally have stopped to scan the birds in the lagoon. I headed into the centre of the dunes, following paths roughly parallel to St Anne’s golf club.

After just a few paces, the first orchid popped into view, though I had to look hard among all the other flowers. It was barely 15cm high. The flower head was pale pink at the tip, more vivid towards its broad base where the blooms were fully open.

Many orchids are tricky to identify, but a young pyramidal orchid is a beginner’s dream, though when it doubles its height, and the full “spike’ of flowers opens out, the characteristic pyramid shape disappears.

However, if you look closely at any of the many tiny flowers that make up that spike, you can easily find another unique feature: two little ridges. These form a kind of ‘runway’ to guide the proboscis (tongue) of an insect visitor down, seeking nectar, into the narrow spur at the back of the flower. This ensures the insect inadvertently picks up pollen and, hopefully, transfers it to another plant.

These ridges are visible to the naked eye, but a hand lens, ideally with an LED light, is invaluable to open up the full range of beauty and wonder within any orchid flower. It will also quickly cure you of any notion that Irish orchids are less beautiful or fascinating than their outsize tropical relatives.

As I walked into the dunes, pyramidal orchids began cropping up in groups, sometimes a dozen within a square metre.

I’ll never forget the next moment. A small light-and-dark shape beside my boot caught my eye and, it seemed in slow motion, resolved itself into a flower that looked very like a particularly colourful insect.

The bee orchid belongs to the vast Ophrys genus, in which most species mimic the shapes and colours of their pollinators. Finding your first one is a kind of unicorn moment: something you may have often seen in books, but can hardly believe actually exists – and flourishes – on a well-worn Irish dune track.

I walked this path many times over the next few years, finding more species as I approached the alder marsh about half way along: early and northern marsh-orchids, common spotted-orchids, common twayblades and, a July speciality, the gorgeous marsh helleborine.

But I was often baffled by single plants that had characteristics of several species. It wasn’t until I walked the route recently with Brendan Sayers that I began – just about – to unravel a central mystery of orchid studies – hybridisation.

“Orchids are not polite in their bed habits,” says Sayers, and the evidence of inter-species promiscuity is all around us, in the form of what he calls “hybrid swarms”.

We are in the middle of the alder marsh in early June, with numerous early and northern marsh-orchids in flower. Many plants, however, also have some of the distinctive features of common spotted-orchids. But no clear example of these plants visible.

“The common spotted-orchids themselves won’t be in flower here yet,” says Sayers, “but some of its hybrids with marsh-orchids have followed the latter’s timing.”

The early and northern marsh-orchids also hybridise among themselves and, as if that were not complicated enough, even non-hybrids are far from uniform. Taxonomists, who like exclusive categories, sometimes get into heated rows about just how much variation in form is enough to constitute a species (or sub-species).

“We humans don’t like variation very much,” Sayers says, referring in passing to current debates about gender fluidity within Homo sapiens. But he points out that advances in genetics are settling a lot of taxonomic arguments. “A single species may manifest itself in a maddening variety of different ways,” he continues, “but the genetic sequencing may remain exactly the same.”

A classic example of this debate involves the Ophrys genus. You might reasonably imagine that, if the flowers on two Orphrys plants look like different insect species, the plants must themselves be distinct species.

Sayers says this line of thinking led one expert, Pierre Delforge, to describe rapidly increasing numbers of species in the genus, from 148 in 1994, to 215 in 2001. But another specialist, Dion Devey, has used genetic analysis to argue that the number of truly distinct species is much, much lower.

Does all this matter very much? Sayers expresses a healthy scepticism, acknowledging that “it is often the [scientists’] egos that matter most”. But he says the arguments sometimes have significance for conservation, because the existence, or otherwise, of a distinct species is indeed critical for proper allocation of scarce conservation resources.

Finally, the sighting of another bee orchid prompts Sayers to explain that this member of the genus is an even stranger creature than the conventional narrative of its sex life tells us.

If it were a typical Ophrys, the bee orchid would be pollinated by an inexperienced male bee. The insect would overeagerly indulge in “pseudo-copulation”, under the impression that the flower is a female of its own species, and getting orchid pollen all over its person in the process.

But the snag is that, in the case of the bee orchid found in Ireland, if such a bee species ever existed, it is extinct today. So that our bee orchid, despite its name, is not pollinated by any insect, but self-pollinates in a wind-driven dalliance between its male and female flower parts.

Botany, as has often been observed, is not a suitable subject for people who are easily shocked.

The Bull Island is just one of a number of orchid hotspots across the country. Other well-known havens include the Burren, the Raven Nature Reserve (Wexford), the Cloheen Strand intake near Clonakilty, Ballyheigue (Kerry), Mullaghmore (Sligo) embankments and quarries near Enniskillen, and the islands and peninsulas of Donegal.

But once you get your eye in, you don’t have to go to hotspots to find orchids. The pyramidal orchid may be found, albeit exceptionally, in the cracked pavement of a main street, and the two spotted-orchid species, heath and common, turn up across a range of habitats.

Nor should you visit the Bull only for orchids (and birds). The island is exceptionally rich in a whole range of other wildflowers, a magic carpet that changes its weave with every spring and summer month. Dorothy Forde’s book, The Wild Flowers of the North Bull Island, published by Dublin County Council, is a good introduction.