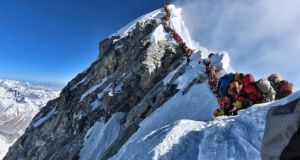 An Irish mountaineer who has summited Everest nine times, said that some of the Nepalese proposals to police the world’s highest peak are “too restrictive”.

Nepal’s tourism ministry announced proposals onWednesday that could significantly restrict the number of people able to climb the mountain.

Under the plan, would-be climbers must have already climbed a Nepali peak of 6,500m, have a certificate of physical fitness and employ experienced guides.

To discourage cost-cutting that can put climbers’ lives at risk, the ministry also said that clients of expedition companies would have to prove, before setting out, that they had paid at least $35,000 (€31,300) for the expedition.

However, Noel Hanna, who leads expeditions on the mountain, said insisting climbers must scale Nepalese peaks is greatly restrictive.

He added that there are mountains outside of Nepal that are just as challenging and would sufficiently prepare Everest hopefuls.

The announcement on the new plan came several months after one of the deadliest Everest climbing seasons in recent years; at a few points, hundreds of climbers waited in line on a steep ridge for hours to reach the summit. Eleven climbers died, despite facing no major avalanche or earthquake.

Seamus Lawless, a Trinity College professor from Bray, Co Wicklow and Kevin Hynes from Co Galway were two of the 11 climbers who lost their lives on the peak this year.

Mr Hanna, who was on the expedition with Mr Lawless, said that “sometimes accidents just happen”.

“The two Irish climbers who died this year were very experienced. Accidents happen. The person who climbed on the North side had climbed Everest so how could you say that he shouldn’t be on the mountain when he had already done it,” he said.

He believes that widening the climbing window and ensuring liaison officers actually climb the mountain with the team are the best ways to make the peak safer.

“Personally, I think they should have it that there’s a better window for climbing. I think the ropes should be put in by the first of May and then people would have been going climbing from the 5th and 6th of May,” he said.

“I’ve been on expeditions, not just on Everest, where you pay for a liaison officer to come with you, and it’s big money, but you never see him. You see him back at Kathmandu whenever you finish the climb and they sign off and that’s it. They’re charging money for these people to be on the mountain with you but they’re just sitting at Kathmandu,” he added.