Home to lizards and lichens: the distinctive ecosystem of dry stone walls

As the climate changes the 400,000km of stone walls in the Irish countryside need care 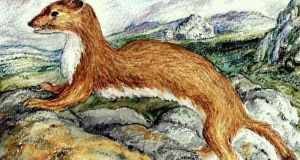 Once, in what proved to be a rite of passage, I followed writer and cartographer Tim Robinson as he led a tortuous way across the field walls on Aran – the “labyrinth” of his first great book on the island.

The secret of crossing these walls was spotting the stone that is laid right through, sticking out at either side to shape a stile. They are crossed in a close crouch, not grabbing at anything in passing, and so smoothly advancing that the islanders seem to gain, as Robinson wrote, “a ghost’s proficiency in passing through walls”.

Along with that, and my first sight of a basking Irish lizard, I learned something of the Lego-like versatility of walls built of limestone: from the solid affinity of vertical slabs to openwork full of holes to let the winds through, in lacy strips against the sky.

Most fragments of limestone strata at least offer some helpful shapes to build with, unlike, say, the cannonballs of granite that must filter storms on the Mourne mountains.

Even before the tourism of the Wild Atlantic Way, the counties from Donegal to Cork were well aware of the cultural and aesthetic capital invested in their dry stone walls

Here in south Mayo most of the fieldstone is sandstone and gritstone dragged along in glacial till or water-rolled in a river to a smooth and slippery finish. There are, nonetheless, some fine walls built of it, and even the conical dog’s-heads can be wedged to stay put.

According to Teagasc estimates there are 400,000km of stone walls in the Irish countryside, “single, double, feidín, stone and sod”, most of them in the west. (Feidín, I learn from a Donegal field guide, is a single wall of large stones, based on a double wall of small ones.)

Even before the tourism of the Wild Atlantic Way, the counties from Donegal to Cork were well aware of the cultural and aesthetic capital invested in their dry stone walls. They have backed training in construction and maintenance, and supported events such as the successful Mulranny Stone Wall Festival held last month in Co Mayo. This included practical demonstrations of restoration and gap-filling of walls along the Great Western Greenway, led by three accomplished masons in the Dry Stone Wall Association of Ireland, a body of no small professional pride.

The renaissance has also been helped by payments offered under Glas, the government’s farm environment scheme, for maintenance of “walls that sit comfortably without the use of mortar, and constructed in a style traditional to the locality”. The minimum length is 10 metres and the maximum, in case anyone should get carried away, is 4,000 metres.

“Something there is that doesn’t love a wall,” is the memorable opening of Mending Wall by American poet Robert Frost. “That sends the frozen-ground-swell under it/ And spills the upper boulders in the sun . . .” Among the benefits of a well-built Irish wall, according to the Dry Stone Wall Association, are its resistance to frost-heave and the rapid drainage of rain.

Another cardinal and much-neglected benefit is offered to the natural world. Glas, agreeably, acknowledges the walls’ protection for wildlife and as “an important habitat for both flora and fauna”, but an actual ecological study is hard to find.

“This could be because a stone wall might not be viewed [as] a ‘living’ habitat, as hedgerows often are,” noted Dr Marcus Collier an ecologist at Trinity College Dublin. The total length of stone walls has been equated with that of Ireland’s hedgerows, and over much of the island they provide unique shelter and a network for nature through the countryside.

On the west coast, their shelter depends on the wind. The more exposed to the southwest the wall face is, and the nearer to the sea, the fewer flowering plants there are.

Plants adapt to them, however, and often grow luxuriantly in the moist, oceanic climate of the west. Walls that dry out in the wind are crusted with lichens and drought-resistant mosses, and grow plants such as stonecrops that store water in fleshy leaves. The slow-growing rusty-back fern is one that curls its leaves in dry weather to hold on to its moisture.

But plants are only part of the wildlife that takes possession of a dry stone wall, so rich in warm, dry cavities and crevices.

For lizards, shrews and field mice, it is a tower-block without lifts. Spiders weave webs across the balconies, or are specially adapted for particular prey. One hunts woodlice; another, with a dazzle-striped body that blends into shadows, jumps on to flies that are sunning themselves. Wrens come rummaging after spiders, or for hibernating butterflies tucked into cracks; stoats wait around corners for the wrens. They also use the wall tops as highways and for predatory vantage, with a poise that can ignore passing humans.

More than wrens are drawn out of the air to nest in walls. Migrant wheatears, native to hot, stony country, fly in early to the crevices of Aran. Arriving from the ocean, storm petrels are churring from the walls and ruins of depopulated islands off the west.

Our dry stone walls are precious, a distinctive Irish ecosystem, and deserve all our care as the climate changes.