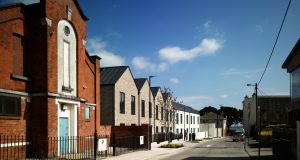 The Dún Laoghaire estate of 12 houses is close to the sea front and the town centre. It is the first ‘rapid’ or ‘modular’ housing scheme by local authorities to tackle the homelessness and housing crises to be shortlisted for the awards.

Two Dublin social housing schemes are among more than 40 contenders for the Royal Institute of the Architects of Ireland (RIAI) annual awards which will be announced on Friday.

The Dún Laoghaire estate of 12 houses is close to the sea front and the town centre. It is the first “rapid” or “modular” housing scheme developed in recent years by local authorities to tackle the homelessness and housing crises to be shortlisted for the awards.

The houses, which are factory built and assembled on the former council depot site, are “nZEB” or near Zero Energy Buildings and have achieved A1 building energy ratings, making them some of the most energy-efficient homes in the State. Each home is equipped with a heat pump, photovoltaic energy generating panels for hot water and heating and has triple-glazed windows.

The council tenants who moved in last year can expect utility bills to cost little more than €200 per year.

Architecturally the houses are arranged in narrow brick gable-fronted two-storey terraces and a wider plastered two-storey terrace that “refer to typologies found in other Dublin city centre locations such as Stoneybatter and Portobello”, said the RIAI.

All homes have own-door access and private space to the front and back. Ash trees were planted along Kelly’s Avenue and laurel hedging with lavender beds was added to the threshold space of each house.

Just 37 of the homes are newly built, with the remaining 63 flats having been refurbished under the council’s “deep retrofit” programme.

The 1950s estate of 400 flats near the Coombe hospital in Dolphin’s Barn, the largest remaining council flat complex in the State, became notorious for a heroin problem in the1980s and 1990s. The flats were increasingly neglected with persistent damp, mould and sewage problems. It was designated for demolition and redevelopment more than a decade ago and the council had hoped to pursue the project as a public-private partnership, but the economic crash scuppered those plans.

The project enabled 72 old flats to be reconfigured, making 63 larger apartments as well as the demolition of two blocks of vacant flats to make way for the new 37 homes, of which 28 are apartments and nine are houses.

Previously underutilised green space between the blocks of the original scheme has been incorporated within the design, using new-build elements to form internal courtyards which have been landscaped with play areas provided. Terraced housing has been designed to create a new frontage overlooking the Grand Canal.

The blocks were stripped back to skeletons to allow for replacement of all sewerage systems and drains, water and electricity services, so they could be redeveloped as low-energy use buildings.

Both projects are in the awards’ Living category.

Elsewhere, the refurbishment and conversion of the former officers’ quarters and mess at Clancy Barracks, Islandbridge, into 13 apartments has been shortlisted in the Adaptation and Re-use category. O’Mahony Pike Architects, along with Lindsay Conservation Architects, decided not to extend the building – dating from 1887 – but to “strip back to the clean lines of this Victorian jewel”.

Elements such as chimneys, stairs, joinery and flooring have been retained, and interventions such as removal of walls and formation of new window openings were minimised.

More than 190 projects were entered in the competition. The awards ceremony will be held in the Mansion House on Friday night.