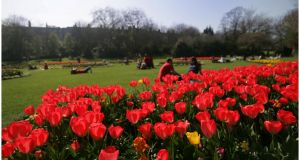 The proposal for Merrion Square was accepted in June of last year by Dublin City Council. Photograph: Bryan O’Brien

Plans for a diaspora-themed “garden pavilion” for Merrion Square in Dublin, funded by philanthropist Norma Smurfit, have been abandoned due to rising costs.

Ms Smurfit, who commissioned the Famine Memorial bronze figures in Dublin’s docklands, wanted to give Irish diaspora around the world the chance to have “a presence in Dublin” by having their names added to a digital display on the inside wall of a new pavilion.

Participants were asked to pay €100 to the Ireland’s Legacy website to have their names added to the pavilion planned for a site at the back of the Rutland Fountain inside the west side of Merrion Square opposite the National Gallery.

The proposal was accepted in June of last year by Dublin City Council.

However, Les Moore, head of the council’s parks service, said the council was informed in recent days that Ms Smurfit’s charity, the Irish Famine Commemoration Fund, was pulling out of the project.

“It’s not going to go ahead. The charity had taken a more detailed look at the costs of the infrastructure and felt it wasn’t feasible. It was heading to upwards of €1 million.”

‘A lot of interest’

Mr Moore said he did not know if anyone had already paid their €100 fee, but he said: “I understand there had been a lot of interest.”

He said the council had not spent any money on the project and was at “no financial loss”.

Independent councillor Mannix Flynn said he was delighted the project was not going ahead.

“All too often the council is too quick to privatise and commercialise public spaces. The park should be a quiet space, people shouldn’t feel any obligation to take part in any commercial activity.”

Mr Flynn said he would have mounted a legal challenge to the scheme had it gone ahead.

“I was going to take this to court. I wasn’t happy with the way this was rolled out – there was no public procurement, no due diligence we were just handing the use part of the park over to a private company.”

The council’s parks department should now devise a more appropriate plan for the park which should include the restoration of the fountain he said.

Attempts to contact Ms Smurfit and the charity were unsuccessful. The Ireland’s Legacy website has been discontinued.