On the equiangular spiral and how the narwhal got its horn 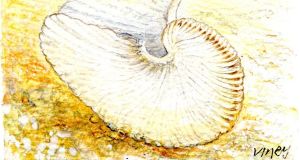 Paper nautilus: a glossy white fan of a shell, so fragile that the sun infused it, gleaming through every tight fold. Illustration: Michael Viney

Once, walking the tideline on my first Greek island, I came upon a most beautiful oceanic artefact. It covered the palm of my hand and there weighed almost nothing: a glossy white fan of a shell, ribbed in a spiral curve to its cornucopia throat, and so fragile that the sun infused it, gleaming through every tight fold.

I’d found the paper nautilus, Argonauta argo, nest and backpack for a little seabed octopus. Aristotle, in History of Animals, pictured the creature rising to the surface “with its shell inverted, in order that it may go out more easily and navigate”, hoisting a membrane as a sail and thrusting out two tentacles as rudders. His whimsy lingered to inspire romantic poets, Byron among them.

I took my treasure back to London, packed in cotton wool. It survived for years, a precious curve of light on sundry bachelor window sills, until it fell, its magic shattered.

What brought this back was finding drawings in a book that analysed the geometric growth of such a shell: “If, instead of travelling with a uniform velocity, our point moves along the radius vector with a velocity increasing as its distance from the pole, then the path described is called an equiangular spiral.”

This is not really my kind of language. Nor, for that matter, is the logarithmic spiral, the Miraldi angle or the tetrakaidecahedron.

I was the wrong kind of schoolboy for mathematics and geometry, let alone physics. So why am I wrestling with a 100-year-old book so full of the stuff?

I was the wrong kind of schoolboy for mathematics and geometry, let alone logarithms or even, sadly, physics. So why am I wrestling with a 100-year-old book so full of the stuff (along with, as is widely agreed, some of the finest English prose in science)?

On Growth and Form, by D’Arcy Wentworth Thompson (1860-1948), has been kept in print by Cambridge University Press since 1917, inspiring followers in science and the arts as variously eminent as Alan Turing, Jackson Pollock, Stephen Jay Gould and Ludwig Mies van der Rohe. I had been quite ignorant of it until a recent BBC radio programme convinced me that the book belonged on the same shelf as Darwin’s On the Origin of Species. A bit late in life, I bought the paperback.

Thompson’s scientific challenge to Darwin is still, as the journal Nature puts it, “making waves in research” and driving neglected fields of study. The impossibly erudite Scottish professor, mathematician, classical scholar and zoologist at St Andrews University was mostly content with the theory of evolution. But he argued there was much more to the shapes of life than the process of natural selection.

Selection accounts for the myriad forms of species by an ongoing winnowing that favours forms and structures best fitted to survive. Thompson, writing before the science of genetic inheritance, preferred to settle for forces affecting growth in the here and now.

“Cell and tissue, shell and bone, leaf and flower,” he wrote, “are so many portions of matter and it is in obedience to the laws of physics that their principles have been moved, moulded and conformed.”

Today, for example, researchers in “mechanobiology” find his theory borne out in cells that “squeeze, flex, stretch and pull on their surroundings and each other, exerting force as they do so”, according to Nature.

Even when not shaped directly by physical forces, Thompson theorised, species can take the ideal forms to suit structural problems

Even when not shaped directly by physical forces, Thompson theorised, species can take the ideal forms to suit structural problems. As Stephen Jay Gould put it, Thompson’s equiangular spirals of paper nautilus and other molluscs apply also to “ram horns and paths of moths flying to light, as the only way to coil and maintain the same shape as size increases . . .”

Another kind of horn, the single tusk of the narwhal, presented a different puzzle. As Thompson wrote, “the only tooth in the creature’s head to come to maturity, it grows to an immense and apparently unwieldy size, say to 8 or even 9 ft long; it never curves or bends, but grows as straight as straight can be – a very singular and exceptional thing.

“It looks as though it were twisted, but really carries on its straight axis a screw of several contiguous low-pitched threads [that] wind evenly and continuously from one end of the tusk to the other, even extending to its root, deep-set in the socket or alveolus of the upper jaw . . .

“I cannot see how to avoid believing that the narwhal’s tooth must revolve . . . very slowly on its longitudinal axis, all the while it grows – however strange, anomalous and hard to imagine such a mode of growth may be.”

Each stroke of the narwhal’s tail, driving forward, he decided, transmits a repeated and ultimate twist to the horn

Thompson found a possible answer in the way a dolphin swims. Each stroke of the narwhal’s tail, driving forward, he decided, transmits a repeated and ultimate twist to the horn. “The horn does not twist round in perfect synchronism with the animal, but the animal (so to speak) goes slowly, slowly, little by little, round its own horn!”