Swedish activist Greta Thunberg and the FridaysForFuture movement released a short film featuring a family calmly getting ready for the day while their house burns down around them as a symbol of the climate threat. Video: FridaysForFuture 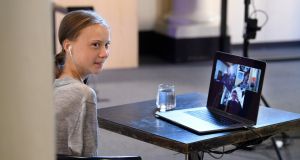 Environmental activist Greta Thunberg has a video conversation about the coronavirus and climate change at the Nobel Museum in Stockholm on Tuesday. Photograph: Jessica Gow/EPA

Swedish activist Greta Thunberg has called for a combined effort to tackle coronavirus and the climate crisis, saying the 50th anniversary of Earth Day was the time to choose a “new way forward”.

In a streamed event to mark Earth Day on Wednesday, she said action to tackle coronavirus did not mean the climate crisis had gone away.

“We need to tackle two crises at once,” she added. “Whether we like it or not the world has changed, it looks completely different from how it did a few months ago and it will probably not look the same again and we are going to have to choose a new way forward,” she said.

Ms Thunberg and the FridaysForFuture movement released a short film featuring a family calmly getting ready for the day while their house burns down around them as a symbol of the climate threat.

The parents happily waving their children off to school appear to represent political leaders whom she and other climate activists have criticised for complacency. It also references her statement at the World Economic Forum in Davos last year: “I want you to act as if our house is on fire. Because it is.”

In an Earth Day message UN secretary general António Guterres urged governments to use their economic responses to the pandemic to tackle the “even deeper emergency” of climate change. “Biodiversity is in steep decline. Climate disruption is approaching a point of no return,” he warned.

Pope Francis urged world leaders to draw lessons from the pandemic and work together to protect the planet and the most vulnerable from environmental destruction and exploitation. “As the tragic coronavirus pandemic has taught us, we can overcome global challenges only by showing solidarity with one another and embracing the most vulnerable in our midst,” he added.

Earth Day played out online as many thousands of events across the planet were forced off the streets. It coincided with calls on global leaders and governments apply the lessons of the pandemic by embracing collective action to address the double crisis of climate disruption and species extinction.

In an open letter to Mr Guterres, the global conservation partnership BirdLife International – of which BirdWatch Ireland is a partner – called for the UN to “take a bold and unprecedented step: declare a healthy natural environment a fundamental human right”.

“Covid-19 is the biggest global crisis since World War II. But whilst the pandemic is devastating, it also gives world leaders a chance, indeed an obligation, to transform society – to further protect our welfare and future generations”, said Patricia Zurita of BirdLife International. “Our planet’s health is our health. We humans rely on nature for our survival and sanity, but our actions have upset Earth’s natural balance.”

The European Space Agency reminded “a world struck by Covid-19” of a unifying message it beamed to the nearest known black hole on the death of Stephen Hawking and shared a video featuring the physicist who says: “I am very aware of the preciousness of time. Seize the moment. Act now... It can be done.”

“When we see the Earth from space we see ourselves as a whole; we see the unity and not the divisions. It is such a simple image, with a compelling message: One planet, one human race,” he adds.

Many scientists and environmental organisations called for the embracing of genuine sustainability and more meaningful conservation underpinned by international collaboration.

The University of Sydney announced measures to save a range of threatened species in Australia, turning to cloud technology through the computing power of Amazon Web Services to accelerate genomics research to prevent the Tasmanian devil from extinction.

Research manager for the Australasian Wildlife Genomics Dr Carolyn Hogg explained: “Australia separated from the other continents more than 95 million years ago. More than 87 per cent of our mammals, 93 per cent of our reptiles, 94 per cent of our frogs, and 45 per cent of our birds can only be found here in Australia. They are vital for biodiversity and we have a responsibility to ensure their survival.”

The only way forward for large-scale genome projects across the world was to “share ideas, data, techniques and tools” she added, “by democratising access to data, more people can work with it and get to the answers sooner.”

The Tasmanian devil is a rare marsupial, found only on the island state of Tasmania. It is threatened, she said, not only due to man-made changes – from extreme climate events like the recent devastating bushfires, to habitat destruction and vehicle collisions – but also by a contagious cancer that causes facial tumours and has reduced its population by more than 80 per cent.