Earth Day to click with over 1bn worldwide on climate crisis 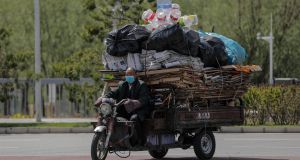 Recycle: Plastic bottles and cardboard boxes being transported to a sorting centre for recyclable materials in Beijing, China. Photograph: EPA

This year’s Earth Day is set to engage more than a billion people across the planet as the web hosts thousands of events drawing attention to “the most urgent environmental issue in history: the climate crisis”, according to organisers Earth Day Network (EDN).

April 22nd is the 50th anniversary of an event that in 1970 prompted mass protests across north America and soon became a global movement.

On the first Earth Day, climate change, deforestation and chemical-intensive agriculture had yet to become existential crises, EDN noted. The issue is pollution; the day a call to action to protect precious resources – air, water, land and all living things – “from the encroaching toxins of industrial society”.

Over the past three years the occasion has become a six-day event, which this year features issues from sustainable consumption to climate-smart agriculture, according to one of the organisers – We Don’t Have Time network.

The idea of the digital gathering, in part, “is to show action on climate change can be a low carbon experience”, said deputy spokesman for Earth Day 2020 Nick Nuttall. “Bringing people together . . . does not have to be accompanied by carbon emissions linked with flying . . . to and from an event.”

In an eve of Earth Day statement, the Global Climate and Health Alliance said that as countries prepare to resume activities after their Covid-19 peak, “decisions governments make now must prepare the way for a safer and healthier future . . . when we emerge from this pandemic”.

Health alliance director Jeni Miller added: “We won’t get another shot at this. Only a global green recovery can sustain a safe and healthy future for all . . . we must choose a sustainable path for our planet, to prevent further crises and protect lives.”

Pandemics were likely to happen again along with many other health crises “unless we fundamentally change the way we travel, trade, power our communities and produce food and goods”, she said.

Covid-19 response-and-recovery packages investing trillions of public dollars being rolled out worldwide had to address the climate crisis at the same time. “They provide a generational opportunity to co-solve the Covid-related economic crisis and the climate-and-air pollution emergency by bringing to life a vision of a healthy and stable planet that will keep us and our kids safer and healthier, and help ensure a global crisis of Covid’s magnitude never happens again.”

David Thorpe, director of the One Planet Centre, highlighted the scale of environmental destruction over the past 50 years. “In 1970 the world as a whole had an ecological footprint of one planet – just enough to provide for everyone. In 2020 we need the equivalent of 1.8 planet Earths – in developed countries the average is much higher – which is why we have the climate and extinction emergencies. We are in what’s known as ecological deficit; 60 per cent of nature has disappeared in 50 years,” he noted.

With the pandemic, he added, “things looked even grimmer, but we mustn’t forget the other emergencies too. And as we emerge, nation by nation, from lockdown, we have an unprecedented opportunity to create a healthier world, a happier and fairer world, a zero-carbon world. A ‘one-planet’ world that is no longer in deficit but living within its means.”

Citizen science is also a strong theme this year. Earth Challenge 2020, is a mobile phone app allowing users to take photographs and upload them to provide local data on key environmental issues, from air quality to plastic pollution. Its backers – EDN, the US Department of State and Washington-based think tank the Wilson Centre – say the information can help create up to date assessments on the state of the environment worldwide.

“An app by nature facilitates public participation,” said Wilson Centre director of innovation Anne Bowser. The creators of the app hope it can be expanded to help contributors report on insect populations and verify satellite data on what crops are being grown worldwide, to better fight hunger.

Observations can be made on local air quality and food security even from people’s sofas when their movements are restricted during the pandemic, added Ms Bowser.

The lockdown is also an opportunity for people with unexpected time on their hands to dig into the often overdue task of making their finances climate smart, said Sophie Cowen of Earth Day Switch.

The earthddayswitch.orgwebsite allows consumers in some countries to see if their banks and energy companies are investing in fossil fuels, whose use creates the majority of greenhouse gas emissions heating up the planet.

While the pandemic caused the postponement of key United Nations negotiations on climate and biodiversity agreements until next year, an online conference of about 100 of the world’s leading scientists, economists and environmentalists is ongoing over this week. – Additional reporting: Reuters