Eleanor’s siren sound: ‘We will run out of luck eventually’

Many parts of Galway city have been flooded due to storm Eleanor. Video: Joe O'Shaughnessy 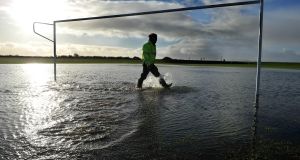 Storm Eleanor has shown once again Ireland’s vulnerability when it comes to storms, according to Irish climate experts.

A bullet was dodged with Storm Ophelia as it hit the south west at low tide in October, but if it had coincided with circumstances similar to those that hit Galway city this week, it would have caused much more destruction, says Prof Peter Thorne of Maynooth University.

“We will run out of luck eventually,” he warns, as Ireland is uniquely exposed as its largest conurbations are located on coastlines. In his view, the level of preparedness and flood protection to deal with such extreme weather events are inadequate.

While there are combinations of circumstances that give rise to storms that often cause a “multiplier” effect, sea level rise is the single biggest risk factor in that mix, he points out.

This was clearly an exacerbating factor in the “huge confluence” of events that struck the west coast this week. These included a particular weather pattern and the “dreaded super moon” phase – when the moon is closest to the Earth and results in a spring tide.

Already, Irish sea levels are 30cm higher than a century ago, and depending on the climate change scenario, could rise by 1 metre by the end of the century. And yet “we cannot conclude either way” that climate change is making such storms more or less likely.

He cites the “brilliant” analysis over the past six years of the American Meteorological Society, notably its annual reports on “Explaining Extreme Events from a Climate Perspective”.

“In the last few years, several times wind storms were looked at but consistently they couldn’t conclude either way a detectable human influence on these.”

The evidence is, however, much stronger on extreme rainfall events and heat effects that could not have happened without human-caused warming of the climate through increases in greenhouse gas emissions.

On flood protection and adaptation measures required for cities on coasts, Prof Thorne adds: “We need to think long and hard on what the risk is.”

This was necessary not only because of predicted sea level rise, but also the potential for greater frequency of extreme weather events. The difficulty was compounded because “sea level is really one of the highly uncertain aspects of long-term climate change”, especially when considering the impacts of a warming Arctic and Antarctica.

The most extreme prediction is a 2-metre rise this century. In such circumstances cities like Dublin, Cork and Galway would be highly vulnerable to damage not just in storms but also in “fairly normal conditions” such as when high tides occur.

Trinity College Dublin geography professor Peter Coxon says Ireland must prepare for the likelihood of storms of greater magnitude and frequency. This required engineered solutions based on more detailed analysis of storms. If this is not done and acted upon “there will be severe damage to property and loss of life”, he predicts.

While important research is being done, a lot more analysis is required, and the research outcomes need to be put in the public domain “so people are aware of potential impacts”, Prof Coxon adds.

Met Éireann’s head of climatology and observations Séamus Walsh says seas along the western seaboard were exceptionally high recently because of a series of typical winter storms. Storm Eleanor was the straw that broke the camel’s back as far as Galway was concerned, as the combination of a low pressure weather system and a high tide made for unfortunate consequences.

While it was too early to say if they are directly attributable to climate change, these type of events are happening in a warmer climate. The use of climate models deployed over a longer period of time would enable more accurate evaluation of data, and prediction of the probability of such occurrences happening due to global warming in the future.

Extremely cold weather in North America of late could be due to normal vagaries of weather, Walsh says. When such a large, cold pool of air sits on the US and Canada it forces the North Atlantic jetstream more to the south, and results in a series of depression weather systems that track over Ireland.

The storm and high rainfall impacts on the west coast confirm “coastal resilience” is a big issue for Ireland, Walsh adds, as most of its people live in cities on the coast. “There is a need for a lot of infrastructure adaptation because of what’s coming down the road due to climate change.”