Future of precarious Kerry fort Dunbeg hangs in the balance

Storm caused part of fort, which sits on cliff edge in Dingle peninsula, to fall into sea 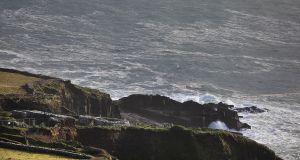 The future of a 2,500-year-old Kerry fort will be decided following an Office of Public Works inspection, due next week.

A magnificent stone doorway, as well as a 10m section of a large rampart, fell into the sea following Storm Eleanor weather damage to the cliff at the foot of Dunbeg or Dún Beag fort on the Slea Head drive in west Kerry.

The fort sits on a promontory near Ventry on the Dingle peninsula, and is one of 17 on the peninsula. It is a national monument, managed by the Office of Public Works and accessed through private lands. The pathway, too, has suffered damage.

It is the second time in recent years that the fort has been affected by storm damage and been closed to the public.

At least 10m of the dry-stone structure has fallen into the sea and the entrance passage into the Bronze Age fort and a dry-stone souterrain have also collapsed.

Dunbeg is one of the better-known forts because of its location on the tourist route of Slea Head. With the advent of the Wild Atlantic Way, Dunbeg had become even more popular, local archaeologist Micheál O’Coileáin said.

Previously the OPW had managed to make the site safe and reopen it. Works may be done again that would allow visitors through, but that will depend on the outcome of an inspection due to take place next week.

The fort had spectacular views of Dingle Bay and probably had a variety of purposes.

“Every threat or trade can be seen,” Mr O’Coileáin said.

Dunbeg was of interest also because there was a long history of usage, with some structures dating from the 10th century.

As with other areas of Kerry’s soft coastline consisting of earth rather than rock, the cliff was being eaten into underneath, making the top unstable.

County councils in the west of the country have said they need millions of euro to build long-term, sustainable flood and storm defences to protect coastal cities and towns.

Speaking in the wake of Storm Eleanor, which caused severe flooding in Galway city, Gary McMahon, of Galway City Council, said he hoped the release of risk assessment maps for Galway would provide a clearer picture of the measures needed.

The catchment flood risk assessment and management maps for Galway are due to be published by the OPW in the coming weeks. They will inform the local authority how best to reduce the damage caused by flooding and high winds, Mr McMahon said. It is estimated that between €9.5 million and €10 million will be needed.

Although Cork city avoided the bad flooding in recent days, it has a history of floods.