Many parts of Galway city have been flooded due to storm Eleanor. Video: Joe O'Shaughnessy 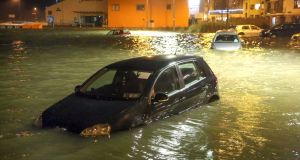 Cars in the flooded car park near the Galway Atlantaquaria in Salthill during Storm Eleanor. Photograph: Joe O’Shaughnessy 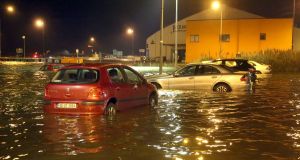 Cars in the flooded car park near the Galway Atlantaquaria in Salthill during Storm Eleanor. Photograph: Joe O’Shaughnessy

Met Éireann has issued a wind warning for parts of the country for the early hours of Thursday after Storm Eleanor brought heavy winds, rain and flooding overnight.

The new wind warning will come into effect at 3am on Thursday and last until 1pm that afternoon. It is valid for Munster and counties Carlow, Kilkenny, Wexford and Wicklow.

ESB Networks said it was attempting to restore power to some 16,000 homes and premises, with 10,000 of those customers in Mayo, the most heavily impacted county. ESB Networks said power had been restored to 134,000 customers affected by the storm and that it hope to have all faults fixed by Wednesday night.

Derek Hynes, Operations Manager for ESB Networks told RTÉ’s Morning Ireland that teams have been working to fix faults on the network since 5pm yesterday. “Mayo is the worst affected with 10,000 without electricity - 2,000 in Westport, 2,500 in Castlebar, 2,000 in Ballina and 1,600 in Swinford, ” he said.

Mr Hynes said there was a possibility of more power cuts on Wednesday and that the company’s main concern was the safety of the public and its staff.

NIE Networks, which manages electricity supply in the North, said its emergency crews had restored power to 20,000 homes affected by Storm Eleanor.

It said there had been more than 400 incidences of weather related damage to the network on Tuesday night and that some 3,000 customers remained without power this morning.

“The damage caused by Storm Eleanor includes power lines brought down by falling trees and poles broken by the high winds,” she said.

The Irish Coast Guard has advised the public to stay away from exposed beaches, cliffs, piers and promenades during storm conditions.

An Garda Síochána advised motorists to drive with care and reduce speed if necessary.

The AA said drivers should allow extra journey time and warned there are likely to be some delays as a result of the weather conditions.

“In particular drivers need to exercise caution when driving on motorways as sudden gusts of wind can make what are normally Ireland’s safest roads very hazardous,” a spokesman said.

“Strong gusts of wind combined with heavy rain and road spray from other vehicles severely reduces driver visibility and also impacts on the driver’s ability to maintain control of the car.”

Minister of State for Flood Relief Kevin ‘Boxer’ Moran said that local authorities needed to learn from the experiences of Storm Ophelia and Storm Eleanor while the public has to be more prepared for such extreme weather events.

He told RTÉ’s Morning Ireland that this was not the time to play a ‘‘blame game” following complaints in Galway from businesses who said they had not been warned about the possibility of flooding.

Mr Moran said that updated flood risk maps would be published later this month and he promised that he will do his best to get flood defences in place.

“I want local authorities to work with my department to fast track plans. People are fed up with waiting, they want to see machines on the ground,” he said.

“The people of Galway have suffered too much...I’ve been around the country over the last number of months and seen four major floodings ... and every local authority can learn in relation to what’s happening,” he said.

“I know that we have to sit down now and talk to the city and county managers … because if you look at what happened in Mountmellick or look what happened in Galway or in Donegal, we have to learn from this because these extreme weather events are happening far too often.”

“A combination of high tides and exceptionally high seas may yet result in ongoing coastal damage and further flooding along the west coast.

“Sustained winds really packed a punch across the west last night with a gust of 155km/h recorded across Knock.

“In the short-term we’re looking at scattered squally showers continuing with risk of local surface flooding and the showers then becoming confined to the northwest during the course of the day and at last the winds moderating for a time then.”

Ms Ryan said there is “some uncertainty” regarding the weather for Thursday with long spells of rain and colder conditions anticipated.

“Friday will be a very cold day once again with brisk, north east winds striking down scattered falls of rain, persistent across east and northeast counties and again there will be the risk of sleet in these parts.”

Winds will gradually ease by the weekend with severe frost and ice forecast.