The Irish Times view on murders in Dublin: Shared culpability 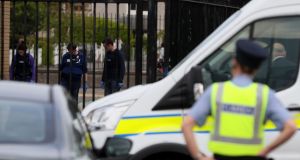 Gardaí at the scene in the Marigold Road area of Darndale after a second man was shot in Dublin in less than 24 hours. Photograph: Brian Lawless/PA Wire

An escalation in gang violence has left two young men dead and another fortunate to be alive. A botched attempt was made to shoot a man in Mulhuddart on Tuesday. Two hours later the body of Sean Little (22) was found near Walshetown in north Co Dublin. At 4pm on Wednesday, his friend Jordan Davis (22) was shot dead in Darndale.

That two lives were taken in pursuit of the drugs trade is repugnant and cruel. It underlines the hard reality that when such violence gains traction, it is not containable. Little was a minor player; he had no criminal convictions but wore a bulletproof vest for protection. Davis was also a minnow. His killer shot him in the head as he wheeled his child, born in January, in a pushchair.

Gang feuds are intensifying in Mulhuddart and Finglas. The Kinahan-Hutch conflict has left 18 men dead in 3½ years. In Drogheda, a bitter dispute in which petrol bombs and explosive devices have been deployed in suburban settings, has been under way since last July.

Most of the proceeds come from so-called recreational drug users

Garda numbers are growing and investigations are progressing. Rightly, expenditure on overtime is being closely monitored. However, Garda spending – including overtime – must prioritise policing that pressurises gangs and deprives them of the space they need to operate and expand. The Limerick feud and the growth of the Kinahan gang are reminders of what can follow when criminals develop their activities.

At the same time organised crime must not be viewed exclusively through the prism of policing. Resources are required at community level to tackle drug abuse and to support chronically under-funded diversion mechanisms that can break the cycle of drug abuse and criminal activity.

Nor is it coincidental that gangs are vying for supremacy at a time when the disposable income that fuels the drugs trade has increased. The bullets, guns, gunmen and logistic support that took the lives of Sean Little and Jordan Davis were funded by drug sales. Most of the proceeds come from so-called recreational drug users. All involved share culpability.

1 Transgender Cork farmer (65) surprised at positive response to telling her story
2 Bobby Storey: The IRA's planner and enforcer who stayed in the shadows
3 Storey funeral a reminder that IRA army council runs Sinn Féin
4 Is Donald Trump losing his touch?
5 Q&A: How close are we to having a Covid-19 vaccine?
Real news has value SUBSCRIBE