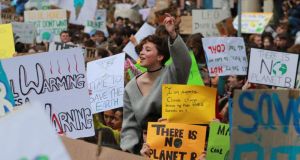 Political discourse in the State is mostly predictable but it can spring big surprises, sometimes from unexpected quarters.

On March 15th, children and teenagers throughout Ireland took over the streets of our cities and towns to protest about climate change, and vent their frustrations at the inaction of politicians. It was a wake-up call. Over recent years, far from being in the limelight, climate change had been eclipsed by recession, Brexit, housing, and other more immediate priorities.

The protest by schoolchildren was a jolt. But there was a second surprise, one that was already well in train. For some months, and under the radar, Irish politicians from all ideological hues are finally getting to grips with climate change. As the children took to the streets, 16 TDs and Senators were trying to finalise the most dramatic response to climate change in Ireland since the Greens first entered government in 2007.

Most people who saw the numbers of the 2016 election results foresaw massive problems. No party, or combination of parties, had anything close to a majority

The Joint Committee on Climate Action was established only nine months ago with the specific task of considering the recommendations of the Citizens’ Assembly on climate change.

Most people who saw the numbers of the 2016 election results foresaw massive problems. No party, or combination of parties, had anything close to a majority. There was a lot of talk of new politics, of the Nordic models of democracy where deal-making, concession and co-operation are the norms. But they have been honed over generations in Scandinavian countries. They are new concepts in Ireland. Most commentators were of the view that the system was incapable of making truly game-changing decisions.

But this fractured Oireachtas has produced some political shifts: a new blueprint for the health services, Sláintecare; the historic abortion legislation; and now, potentially, a ground-shifting climate change policy.

“New politics” seems again to be having a moment – producing the groundwork for change in a model similar to how the abortion issue was handled. First the Citizens’ Assembly made 15 key recommendations, giving the committee a map with a clear route marked out.

A temporary committee was formed, chaired by the even-handed, organised Fine Gael TD Hildegarde Naughton. It was well resourced, acquiring professional advice from within and without the Oireachtas. Another big component was the input from the Irish Climate Analysis and Research Group at Maynooth University, led by Prof Peter Thorne. The team advised on how to approach the workand frame the report. In addition, each of the parties and group were allowed to commission its own expert advice.

The initial phase was public, with all Government departments briefing what they had done on climate action. This was frequently described as a depressing experience. “We were very disappointed with the feedback from the various departments in relation to their future plans,” admitted Naughton.

“We could not produce a report until we knew what was coming down the line, and there was very little.”

Since late January it has been an underground operation – literally and figuratively. The committee rooms are in the basement of the new annex in Leinster House. Over the last two months all of its work has taken place behind closed doors.

Away from the public glare, politicians from across the spectrum have reached consensus on a range of actions. Of course, there were differences and dozens of amendments that some found unpalatable. The outside advisers were instrumental in finessing the details. “They triaged most of the amendments of members [in private],” says one member, helping to get much over the line.

The target is to have net zero carbon emissions by 2050. That includes bumping up renewable energy by 70 per cent by 2030

Anyone familiar with previous government “plans” to tackle climate change will know the targets were ambitious but the details on how they were to be achieved were woolly. The committee was determined that this time it would be different.

The target is to have net zero carbon emissions by 2050. That includes bumping up renewable energy by 70 per cent by 2030.

Until now the Government has defended high emissions in agriculture on grounds that Irish farming is “green” and sustainable. But for the first time, diversification and land-use change are accepted (meaning diversification away from beef and dairy).

There’s also a cross-party agreement that peat will no longer be used as a fuel (boglands could be rewetted to allow carbon capture). Common Agricultural Policy payments would be changed to favour environmental change such as increased afforestation (another carbon sink).

Other significant proposals include: ramping up offshore wind (which is less controversial with local residents); a big increase in solar power; microgeneration (which allows households to get paid for contributing electricity to the grid); and increases in the numbers of electric vehicles and public transport (10 per cent of transport spending in future would be earmarked for cycling).

There’s also the notion of a “just transition”, championed by Labour’s Seán Sherlock, to ensure no fuel poverty, or that those who lose jobs (such as peat workers) do not now suffer economically.

But the biggest breakthrough might be on the issue of governance. This ad-hoc committee would become statutory and hold the government of the day to account. A powerful new Climate Action Commission would have advisory and compelling powers. There would be a five-year carbon budget, and a climate action implementation board within government.

These instruments are technical, and hardly headline grabbing, but they help to get the work done.

“This is . . . to make sure the recommendations are implemented,” says Naughton. “We will hold Ministers to account and will be able to monitor their progress if not meeting their targets.”

So far so idealistic. But old politics reared its head as soon as the hearings became public this week. The most divisive row has been about carbon tax. It was introduced a decade ago and has stood at €20 per tonne since then (it adds about 6c to a litre of diesel, or 50c of the €5 price for a bale of briquettes).

Most of the committee agree it should be quadrupled to €80 per tonne over the next 11 years. But Sinn Féin and People Before Profit oppose carbon tax, arguing it will affect the poorest most. They favour taxing enterprises instead.

Other parties accuse them of being populist, of making this “the new water charges” campaign. “They are obviously gearing up to protest vociferously against these measures. It is disingenuous for them to use an issue like climate change to wage a populist war,” claims Sherlock.

Carbon tax hasn’t worked. Increasing it won’t work. The proposals from the other parties will impact harder on ordinary working people and families

Both parties deny this and claim carbon tax is regressive. Indeed, there are other divisions. On this issue Fine Gael favours a fee-and-dividend approach which gives all households a payment (such as a tax credit) to compensate for carbon tax.

The idea of this is that the most efficient households could save money. Fianna Fáil and Labour favour carbon tax money being ringfenced for insulation or to prevent fuel poverty.

There was a fear this week within Fine Gael that Fianna Fáil was back-sliding from the carbon tax. It opposed a Fine Gael amendment where the €80 per tonne figure would be specified in legislation. That suspicion was heightened by the presence of climate change sceptic Danny Healy-Rae on Tuesday, who voted for Fianna Fáíl’s amendments. (As it transpired both were defeated).

Fianna Fáil denies this, pointing to the fact that it introduced carbon taxes in the first place. “That’s the only element of the whole plan that’s hardwired by Fine Gael, the €80 tax. It was all take and no give. We were not going to give them a free pass to raise the money without telling us what they were going to do with it,” said one Fianna Fáil TD.

The issue of carbon tax was not resolved during a marathon eight-hour meeting on Wednesday. But on Thursday morning, representatives from Fine Gael, Fianna Fáil, Labour and the Greens started working on a new amendment.

By the time the committee resumed that afternoon, ahead of the publication of the report that evening, they had agreed a wording.

It had a number of conditions but the key point was a commitment to increase carbon taxes to €80 a tonne by 2030.

Sinn Féin’s Maura Devine accused the four parties of complicity and of undermining the committee’s nonpartisan approach. It tabled its own amendment to remove all references to carbon tax from the report, but this was defeated. Later, the party’s three representatives stood on the plinth with a minority report, proposing no changes to current carbon taxes.

“Carbon tax hasn’t worked. Increasing it won’t work. The proposals from the other parties will impact harder on ordinary working people and families,” said Brian Stanley of Sinn Féin.

We have committed to deep-retrofitting 45,000 houses per year by 2021. Last year we did 220. We should be figuring out how the hell we can move from here to there

Similarly, People Before Profit TD Bríd Smith opposed the carbon tax measures saying they would impact most on low-, and middle-, income households. Her amendment to explore a tax for major agrifood industries was also heavily defeated when put to a vote on Thursday.

There were other areas of ideological division this week – the majority rejected a Green Party proposal that investment in transport be ranked two-to-one in favour of public transport. Another Green motion to reduce speed limits by 10km/h to reduce emissions was also rejected by the bigger parties.

Many committee members were concerned that all public attention would be on carbon tax and not on the other 95 per cent that had been agreed.

“We can’t focus just on this,” said Green Party leader Eamon Ryan. “We have committed in this report, for example, to deep retrofitting of 45,000 houses per year by 2021. Last year we did a total of 220. We should be figuring out how the hell we can move from here to there in just two years.”

That statement illustrates both the scale of the ambition, and the daunting urgency of the challenge.