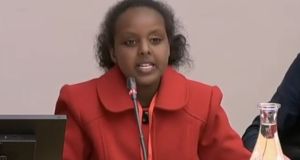 Sumaya Mohammed (12) of Cork Educate Together Secondary School told the climate committee: ‘We should be enjoying life having carefree thoughts and not having to worry about the future of the world. Yet we are here telling you how to do your job.’

Five students who took place in recent school strikes for climate, made a collective plea on Thursday to the Oireachtas Committee on Climate Action to “take a leap” in responding to global warming.

The students, who addressed the committee before it signed off on its report on how Ireland should address climate change, criticised politicians who supported their strike but failed to take action.

Theo Cullen-Mouze (16) said he had grown up on a farm on Clare Island in Co Mayo “where our offshore community has already seen the evidence of climate change in a very real and frightening way”.

He added: “The unfortunate truth, however, is that even though progress is made, and even though Irish politicians have largely been very supportive of the climate strikes, we are still not doing enough.”

The committee’s report was a step in the right direction, “but we can’t afford to just take steps anymore – we need to make a leap”, he said.

“Even if every single one of the recommendations outlined by this committee were to be implemented by the Government we would still fall short of our targets, perhaps not our official internationally agreed-upon ones, but our moral and ethical ones for sure.”

He welcomed improvements to Irish society, but questioned the benefits of a more progressive, fairer society if society itself ceases to exist?

“This is not an over-dramatisation of the facts: the [UN]IPCC report from last year is quite clear. If we do not act now, we are condemning my generation and the generations to come.”

“One of the main reasons we are in the desperate situation that we are in now is because of apathy, and a general lack of awareness surrounding the issue. And do not for a second think that this is not a desperate situation. It is vital we communicate this to the public, and trying to obscure this fact is not only deceptive, it is downright irresponsible.

Sumaya Mohammed (12) of Cork Educate Together Secondary School told the committee: “We have to fight for our future. All of us here today are students. We should be enjoying life having carefree thoughts and not having to worry about the future of the world. Yet we are here telling you how to do your job.

“You know the root of the problem (greediness and money being allowed to rule) you know the earth has already has already risen by 1.1 degrees since the industrial revolution. Yet you continue to look at us, say to us that ‘we are proud of you’ but the moment you walk out of this room the fact that you don’t do anything about this makes us wonder, are you thinking of your image, more than you’re thinking of us.”

She noted politicians were complimenting young people standing up for their future.

“You said you were ‘inspired’ and ‘enthused’. But your compliments are worthless to us without action. We signed up to the Paris agreement, yet by the looks of it everyone has forgotten. We are Europe’s laggards and it should not be that way.”

Conal O’Boyle (16) from Muff, Co Donegal, said there was a “progressive infrastructure deficit” across Ireland, indicated by a lack of renewable energy projects. Allied to that was lack of progress in retrofitting houses, and a failure to provide what should be free public transport.

Cian Parry of Newpark Comprehensive in Co Dublin singled out the Minister for Climate Action Richard Bruton who supported the strikers but voted against the Climate Emergency Bill, which would have banned fossil fuel exploration. They were entitled to an explanation why he had not supported such an important climate action, he said.