For peat’s sake: Rethinking the bog

A bog’s potential post-production: ‘They are very spiritual places, they have cultural dimensions’ 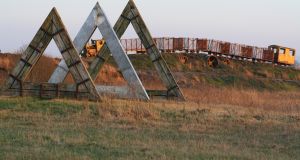 “Bogs take time.” Catherine Farrell repeated this phrase, like a quiet mantra, throughout a presentation on peatlands policy. She was speaking at a workshop, in Kilcormac, Co Offaly, about the future of Lough Boora Discovery Park and, by extension, of Bord na Móna.

Farrell’s phrase reflects the millennia that bogs need to produce deep peat, unfold their full diversity of plant and animal life, and develop their complex relationship with climate.

But we are not time-rich as we face an increasingly urgent climate and biodiversity crisis. So things are changing very fast out our bogs today.

When Farrell became Bord na Móna’s first staff ecologist in 2001, an appointment that was itself a harbinger of rapid changes to come, she recalls that “there wasn’t a word about carbon then. Now it’s all about carbon.”

She welcomes this new appreciation of the role of peatlands in countering climate change, but she adds a caveat: “Don’t forget all the other wonderful benefits bogs provide us with. They are very spiritual places, they have cultural dimensions.”

Hardly anyone thought bogs were cultural icons when Bord na Móna was established by the State in 1946. Even conservationists seemed slow to wake up to their significance.

The company’s first chief executive, Todd Andrews, saw our boglands as a “something to be got rid of, to be turned into productive land”, in Farrell’s words. The company had a straightforward dual brief: to be the strategic national energy provider, and to create desperately needed employment in rural areas. The company fulfilled both roles very well, while becoming a world leader in technical innovation for peat extraction.

No one knew then that the carbon emitted twice over, first by peat mining, and then by peat burning in power stations and in countless homes, would be a major engine of climate disruption half a century later.

As a result of that crisis, we are compelled to end peat production and combustion very rapidly, and to rehabilitate and restore the company’s vast estate of cutaway bogs to the highest possible standard. Broadly speaking, the healthiest bogs draw down the most carbon into the ground, while degraded peatlands continue to leak it into the atmosphere.

Farrell, who recently left the company to pursue research, pointed out that we need to be careful in talking about “degraded” bogs: “It can imply that we deliberately did something wrong on them.”

That’s fair enough, looking to Bord na Móna’s past. However, the company has been well aware of the climate crisis for more than a decade now. It has a responsibility to rehabilitate and restore its 80,000-hectare estate much more rapidly, and thoroughly, than heretofore.

But decarbonisation, though vital for our future, is not a victimless policy in the present. Many rural communities, especially in the midlands, face ruinous downturns right now, as the big machines leave the bogs forever.

That’s one of several factors that makes a focus on the next phase of development at Lough Boora Discovery Park so important. Indeed, the evolution of this 2000-hectare site, from bogs stripped bare to a dazzling array of post-industrial uses, is a hopeful story that suggests new directions for cutaway (industrially exploited) peatlands.

Long before Bord na Móna clearly envisaged any post-production role, some of its workers and middle management began to wonder what uses could be made of the “black deserts” created by peat extraction, barren of plants and animals.

In the early 1990s, employees in the villages around Lough Boora began to discuss informally whether such land could be used for agriculture, or forestry, and also for public recreation, hiking and cycling. An initially sceptical management was finally convinced to let them experiment.

Tom Egan, now manager of the park, recalls “the dream of making Offaly a major agricultural county”. But the peatlands, scraped down to their mineral base, could not support either commercial forestry or agriculture. “You learn,” he told the workshop, “as you go along”.

So the Boora group talked to other interested parties, including local anglers, the National Parks and Wildlife Service, BirdWatch Ireland and, perhaps more surprisingly, artists’ organisations. Hiking and cycling trails were developed.

With time, and judiciously blocked drains, new habitats emerged. Egan recalled how land he had regarded as “unproductive”, because it kept flooding, turned out to have great value for wildfowl and wading birds. As semi-natural wetlands evolved, “it was like the opening of a supermarket, everybody came, huge flocks of duck, wigeon, teal, mallard, and whooper swans”.

Discussions with artists in the early 2000s led to the creation of a sculpture park at Boora. This called forth some highly evocative work, like Michael Bulfin’s Sky Train, which builds an airy bridge over a boggy horizon, using the tracks and vehicles from the eccentric-looking, but efficient, bog railways.

The artists were asked to meet some conditions: “If this was to be a place where art and nature meet, they had to use materials indigenous to area, whether natural or industrial. They discovered the potential of scrap iron. There was a great working partnership with the engineering skills within our workforce,” Egan said.

Today, the park forms a unique mosaic of blueprints for exploited peatlands. It lies in the heart of the country, and attracts 100,000 visitors a year. But how might this community-corporate initiative evolve again, to reflect the very different culture and nature on our national boglands after peat production ends? What might a second generation of Boora sculptors engage with, and what resources would they need?

That is the question that Bord na Móna, Offaly County Council, and the Arts Council asked Tim Collins and Reiko Goto, who organised the workshop. Their Glasgow studio specialises in “deep mapping”, a process that explores links between artists, places and communities.

Could the big machine-shops on the Boora complex house a museum that could celebrate the remarkable history of Bord na Móna?

Could Boora also accommodate studios for artists and research spaces for ecologists? Could these disciplines interact to produce new kinds of sculpture, celebrating bog restoration instead of industrial production?

And to what extent might these developments provide local jobs to compensate for those lost to decarbonisation?

These questions suggest that Boora can become a living laboratory for the diverse futures of post-production peatlands across the country. As such, it deserves the same kind of investment that has sustained Bord na Móna over eight decades.

Finding appropriate ways to apply Boora’s lessons across Bord na Móna’s national estate will, like bogs themselves, take time. But we must start now.

What do local people think?

The workshop was followed by a public meeting on the future of Lough Boora. Among the points made:

“No cultural institution or sculpture park can compare with the economic engine of Bord na Móna.”

“Bord na Móna is owned by us. Jobs need to be created, there is an ethical obligation to look out for local people.”

“This is a co-created space between nature and humans. It has health benefits. Arts feeds the soul, nature nourishes the soul. We’ve heard of forest-bathing in Japan. Perhaps we need to develop bog-bathing in Ireland.”

“It’s remarkable that the parklands attract 100,000 people, but it absorbs them like a sponge. I walk there regularly, and I never seem to see more than three or four others.”